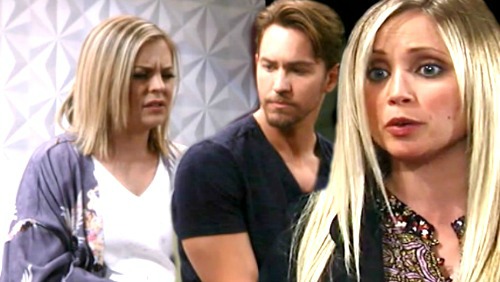 General Hospital (GH) spoilers tease that the green-eyed monster could bring some changes for Maxie West (Kirsten Storms). She’s been in denial about her feelings for Peter August (Wes Ramsey), which is certainly understandable. Maxie has been struggling with the loss of her beloved husband, Nathan West (Ryan Paevey). She was also hurt deeply by Peter’s lies and their broken friendship.

However, GH characters rarely stay mad forever. Peter still cares about Maxie and wants to repair the damage he caused. He’s learned his lesson when it comes to revenge, so he’s ready for a fresh start. Can Maxie eventually give Peter one? It sounds like she might as new circumstances draw them together!

Peter may not even have to use any manipulation this time around. Maxie’s jealousy could be what pulls her closer. Now that Lulu Falconeri’s (Emme Rylan) working with Peter at The Invader, Maxie could witness some bonding. She may wonder if Lulu and Peter are contemplating a romance.

Deep down, Maxie will want to believe Lulu’s going to remain faithful to Dante Falconeri (Dominic Zamprogna). He’s off on a mission, so Lulu’s on her own for a while. Still, Maxie may have questions about Peter and Lulu’s growing connection. Her own feelings could make her see signs that aren’t there.

Could Maxie become envious of Lulu’s bond with Peter? Maxie won’t be hanging out at The Invader office, but she could still spot them together in public. Working lunches and other off-site business meetings may prove crucial. Maxie could ultimately confront Lulu about what’s going on. She might suggest she’s concerned about Lulu betraying Dante – or at least complain that it looks that way.

Of course, Lulu knows her bestie quite well. She might see right through Maxie’s claims and ask what this is really about. Lulu may wonder if Maxie’s sure she doesn’t have secret feelings for Peter. She could argue that Maxie seems jealous, which would probably score another denial at first.

Nevertheless, Maxie might do some soul-searching and see Lulu’s point sooner or later. General Hospital spoilers hint that Peter and Maxie could be on the verge of a hot romance. It’ll take a while to get there, but that’s what GH appears to have in mind.

Are you anxious to see Maxie and Peter as a couple? Do you think jealousy will push Maxie to accept her feelings? We’ll give you updates as other General Hospital news comes in. Stay tuned to ABC’s GH and don’t forget to check CDL often for the latest General Hospital spoilers, updates and news.