General Hospital Spoilers: Maxie Begins Her Future with Peter – Will Nathan Return from the Dead and Derail New Romance? 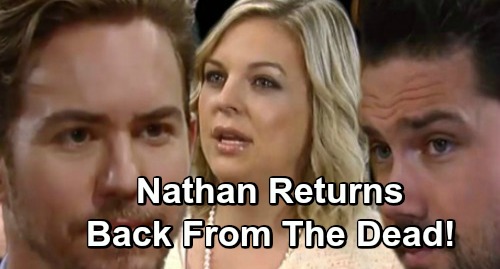 General Hospital (GH) spoilers tease that some cast shakeups could be in the works. According to a new blind item from Soap Opera Digest, one daytime drama will make some surprising casting announcements soon. This info could be about any of the four main soaps, but GH certainly likes to keep things interesting when it comes to debuts, departures and comebacks.

Of course, nothing would be more surprising than a return from the dead. Morgan (Bryan Craig) is an obvious contender for that kind of plot since his name is mentioned constantly. It’d be easy to undo his presumed demise and bring Morgan back in the form of a recast.

However, there’s another dead character who’s been mentioned a lot lately. Maxie (Kirsten Storms) has spent a good chunk of time grieving for Nathan (Ryan Paevey), but she finally seems ready to let him go. She recently brought up the subject of starting over with Peter (Wes Ramsey) and dropped a hint about dating.

GH fans know Maxie and Peter almost kissed not too long ago. It’s clear that their feelings are growing stronger, so Maxie’s ready to let her mourning walls down. She shouldn’t have to be stuck in grief mode forever.

Peter is definitely interested in seeing where a relationship with Maxie might lead. He’s closer to her than anyone else on canvas, so their bond has become truly special. General Hospital worked hard to put these two together, but the drama can’t stop once they actually become an item. There’ll inevitably be some obstacle that emerges on the road to happiness.

What would be a bigger obstacle than Nathan suddenly coming back from the dead? His death would be a bit harder to undo than Morgan’s, but it certainly wouldn’t be impossible. In the soap world, returns like this are easy to explain. Nathan’s death could’ve been faked along with Faison’s (Anders Hove). After all, you can’t keep a good villain down!

It’d be interesting if GH revealed to the audience that Nathan is actually alive somewhere. That’d rev up the suspense as Maxie and Peter begin their journey together. By the time the truth is revealed in Port Charles, Peter and Maxie could be in deep. They might even be prepared to tie the knot at that point.

Maxie would likely get back together with Nathan, which could bring a real inner struggle. She could be torn between her past and what she thought would be her new future with Peter. Whether Paevey reprises the role or a recast steps in, there’d be loads of drama to play here.

Do you think Nathan should return from the dead? Is he a better love interest for Maxie or do you like where the story’s headed with Peter? General Hospital spoilers say some shockers are looming, so we’ll give you updates as other GH news comes in. Stay tuned to the ABC soap and don’t forget to check CDL often for the latest General Hospital spoilers, updates and news.