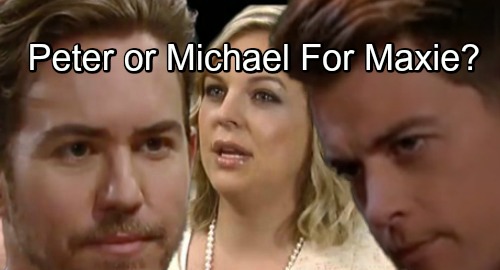 General Hospital (GH) spoilers tease that Maxie (Kirsten Storms) will find love again. She’ll always feel like Nathan (Ryan Paevey) was the man she was meant to be with, but she shouldn’t let that stop her from seeking happiness. She deserves to share her life with someone special and head down another joyful road.

Maxie’s got some great options in Port Charles. Chase (Josh Swickard) is single and ready to mingle, but General Hospital spoilers say he’ll be bonding with Lulu (Emme Rylan) soon. GH may plan to pair them up now that Dante’s (Dominic Zamprogna) out of the picture. With that in mind, that leaves two eligible bachelors for Maxie. Let’s consider the pros and cons of each one.

For starters, there’s Peter (Wes Ramsey). He seems like the logical choice after the elevator incident. Their connection was on full display once again! Maxie and Peter had built a strong friendship before Peter’s lies were exposed. Although Maxie was hurt by Peter’s deception, she never stopped caring about him.

Deep down, Maxie seems to understand that Peter has a kind heart. He’s also Nathan’s half-brother and James’ uncle. It’s soapy for Maxie to fall for Nathan’s messed-up sibling, so General Hospital may stay on this path. Since Nina (Michelle Stafford) and Lulu will fight against this pairing, that’d add to the drama.

However, GH romances always come with some obstacles. Lulu’s been warning Peter to back off, so that’ll be a big one. He won’t want to take advantage of Maxie’s vulnerability or set her up for any more pain. Maxie will also have to open her heart and express willingness to move beyond the past.

Then again, Maxie could always take a detour on the way back to Peter. She could even change course entirely. General Hospital has had a couple of fantastic scenes between Michael (Chad Duell) and Maxie. Many GH fans have commented on their chemistry, so this might be another option to mull over.

Maxie and Michael certainly seem like they’d be a nice match. Since Michael’s grieving over Jonah right now, it might be good for him to step up and be a father figure for James. When the truth about “Wiley” comes out, it’d be cute to see Michael and Maxie raising their boys together.

Peter and Michael are both handsome fellas, so Maxie has no worries there! They have different personalities and problems, but they’re also kind and care about Maxie. Which guy do you think is best for her? We’ll give you updates as other GH news comes in. Stay tuned to the ABC soap and don’t forget to check CDL often for the latest General Hospital spoilers, updates and news.