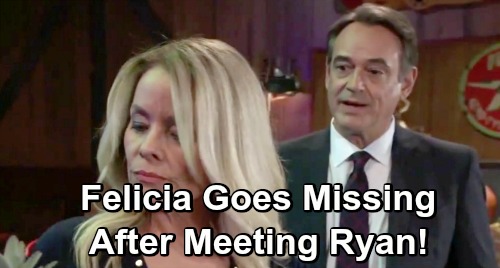 General Hospital (GH) spoilers tease that Laura (Genie Francis) will grow increasingly desperate. She’s fed up with “Kevin” aka Ryan (Jon Lindstrom) right now, but she still cares about him. Laura can tell something’s off and she’s determined to help “Kevin” get some help. She’s not sure she sees any hope for their marriage, but she doesn’t want to see “Kevin” completely lose his identity.

GH fans can expect Laura to get some help on December 27. She’ll turn to a familiar face and hope they can team up. General Hospital spoilers say Felicia (Kristina Wagner) will listen to Laura’s view on the situation and weigh in. She hasn’t been around “Kevin” enough to notice major changes, but she won’t like what she hears from Laura.

“Kevin” and Ava’s (Maura West) relationship alone is cause for concern. She’s just not the kind of gal “Kevin” would normally be interested in. Ryan’s obsession with Ava could be his downfall since it’s raising suspicions. Plus, she’ll inevitably find out what he did to Kiki (Hayley Erin). Ava should become Ryan’s worst nightmare when she learns he killed her oldest daughter.

Of course, that drama will have to play out later. Ryan’s got more chaos to cause and it could involve Felicia. Old habits are hard to break, so his interest in Felicia may be revived soon enough. Ryan’s been focused on Ava, but she’s just an angry, sobbing mess now. She’s not the same confident and somewhat sinister woman Ryan fell for.

Laura can’t get through to “Kevin,” but she might think Felicia can. Maybe Felicia will reach out and inadvertently stir up deadly trouble. She might remind Ryan of his previous infatuation and renew his dark desires. General Hospital spoilers say Lucy (Lynn Herring) will be frantic on January 3. She’ll plead for Maxie’s (Kirsten Storms) help, so this could involve her missing mother.

Will Peter (Wes Ramsey) emerge as a hero in all this? If Maxie and her family are caught up in danger, you can bet Peter will be right be her side. He’ll naturally step up to keep Maxie happy and safe. That goes for the people she loves most, too. Felicia may be targeted, but let’s hope she gets assistance before it’s too late.