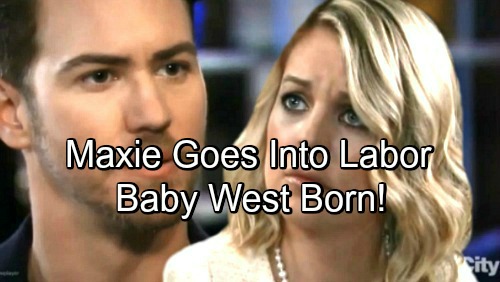 General Hospital (GH) spoilers tease that Maxie’s (Kristen Storms) night at the Nurses Ball will take a surprising turn. She’ll battle some pain and soon determine that she’s facing contractions. Maxie may worry about making it to GH in time. Baby West will be ready to make his or her debut, so the situation could grow dire.

When a General Hospital character’s in labor, there are always major concerns. Maxie will want to make sure all the proper equipment’s around in case something goes wrong. There’s no word yet on where Maxie’s baby will enter the world. She may be forced to improvise somewhere or Peter (Wes Ramsey) could get her to GH like she’s hoping.

Regardless, Maxie will face some tough moments. She’ll endure an exhausting birth, but that won’t even be the worst part. There’s a good chance a sudden wave of sadness will hit Maxie. She may be overcome with grief as she goes through this without Nathan (Ryan Paevey).

Fortunately, Peter (Wes Ramsey) will stay with Maxie during this difficult ordeal. He’ll sense that she’s an emotional wreck, so he won’t want her to go through this alone. General Hospital spoilers say Peter will remain by Maxie’s side until the baby arrives. He’s a manipulative liar, but at least Maxie will have someone in her corner. That should mean a lot to her as the brings new life into the world.

Later, Maxie will face more discouragement. That could mean a couple of things, so here’s how it might play out. It’s possible Maxie’s kid will have some health woes. That could leave her fearful and force her to lean on Peter once again.

Maxie’s dismay could also stem from her mourning. The baby might be OK, but she’ll have to hold him or her without Nathan around. Maxie will undoubtedly have mixed feelings here. She’ll feel love and joy over her little one, but it’ll be hard to overcome that crushing sorrow.

General Hospital spoilers say Peter will do everything in his power to lift Maxie up. Too bad he’ll drag her back down before long. Once Peter’s exposed as Heinrik, Maxie’s sure to feel duped and furious! We’ll give you updates as other GH news comes in. Stay tuned to the ABC soap and don’t forget to check CDL often for the latest General Hospital spoilers, updates and news.