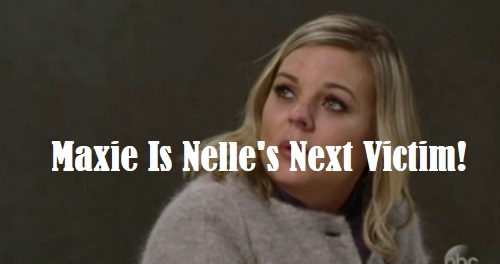 General Hospital (GH) spoilers reveal that Maxie (Kirsten Storms) just made a huge mistake. Nelle (Chloe Lanier) really has a Michael (Chad Duell) obsession at this point. Her whole life revolves around securing another chance with him. That’s why Maxie should’ve known better than to move in on Nelle’s territory. This girl’s crazy and it’s best to just stay out of her way!

Nelle and Nina (Michelle Stafford) were both running a bit late for the birthing class, so Michael offered to be Maxie’s partner for a while. They joked around and happened to be sharing a few laughs when Nelle walked in. If looks could kill, Maxie would be dead already! Nelle was NOT happy, so GH seems to be setting something up here.

Maxie is clearly more interested in Peter (Wes Ramsey) than Michael, but it’s a little soon to move on anyway. It’s clear that Maxie’s still mourning Nathan’s (Ryan Paevey) death. She hasn’t even given birth to his child yet, so she may hold off on romance for the time being. Maxie needs to focus on preparing for her kid. 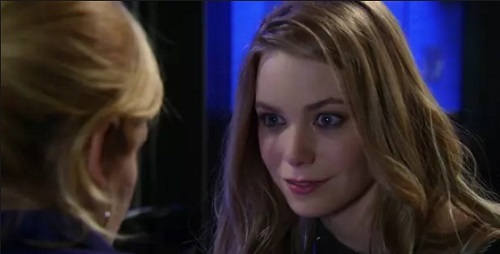 Unfortunately, Maxie just got on Nelle’s bad side and that could lead to major baby drama. Nelle’s not the kind of gal to let stuff slide. She’s also sinking deeper and deeper into her Carly (Laura Wright) plot, which exploits Morgan’s (Bryan Craig) death. Nelle’s stooping pretty low – even for her!

This helps GH fans see just how far Nelle will go to get what she wants. There’s no line she won’t cross if it means eliminating a threat or seeking revenge. Thanks to that warm birthing class moment, Maxie just made herself a target. Her baby is a prime candidate for stealing now, so don’t be surprised if the bundle of joy gets swiped down the road.

Nelle’s baby might die, which could lead to a swap with Maxie’s healthy kid. Then again, Nelle’s new bestie needs a baby as well. There may be a way for Nelle to finagle this little one for Brad (Parry Shen).

Of course, there’s no guarantee Maxie will actually give birth. If Nelle really wanted to be ruthless, she could make sure Maxie had an “accident.” Nelle might be nasty enough to want Maxie’s baby dead. It’d be cruel for General Hospital to take away Maxie’s last link to Nathan, but all bets are off when Nelle’s involved.

Nevertheless, the baby swap seems like the most likely option since Maxie’s so far along in her pregnancy. Whatever the case, Maxie’s bound to become Nelle’s next victim. General Hospital spoilers say more shockers are coming up, so we’ll give you updates as other GH news emerges. Stick with the ABC soap and don’t forget to check CDL often for the latest General Hospital spoilers, updates and news.