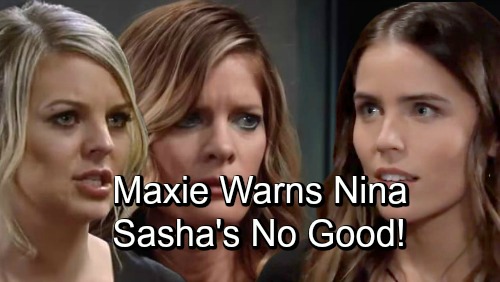 General Hospital (GH) spoilers tease that Nina (Michelle Stafford) will prepare to meet her daughter soon. She’ll be thrilled over the chance to bond with Sasha (Sofia Mattson), but she’ll also be nervous about the road ahead. Nina missed Sasha’s childhood and teen years. She’s missed some of her early adult years as well. It’s clear that they’ve got a lot of catching up to do!

Despite the inevitable awkwardness, Nina will want to show Sasha real love. She may not know her yet, but she’ll be ready to open her heart. Nina’s always wanted a kid of her own, so she’ll embrace her shot at connecting. However, Nina will face at least one naysayer as she preps for her first meeting.

General Hospital spoilers say Maxie (Kirsten Storms) will pump Nina for information. She’ll realize something’s up, so she’ll do her best to pry the truth out of her. Once Nina comes clean, Maxie will advise her to be careful. Despite Curtis’ (Donnell Turner) involvement in the investigation, Maxie just won’t trust the outcome. She may think all of this came together just a bit too easily.

Many GH fans would agree! The mystery was resolved rather quickly, so there’s undoubtedly more to the story. It’s tough to believe Valentin found Nina’s daughter and that’s that. Nina will just want Maxie to be happy for her, so she’ll promise that she is. Nevertheless, Maxie will push Nina to be careful. She may worry that some hiccup will emerge and bring devastation.

The fact that Valentin and Curtis ordered two DNA tests doesn’t matter. On a soap, you could do a billion and still have them all be wrong. Altered results tend to be expected at this point. Even if the results are accurate, Sasha seems like the type of gal who could be shady. Who knows what dark secrets she might be hiding? Some shocking agenda could surface sooner or later.

It sounds like Maxie’s right to be worried for Nina. General Hospital spoilers hint that Sasha may bail on their initial introduction. That alone could bring some serious pain, but the worst is still to come. Will Nina ever break down Sasha’s walls? Will she eventually bond with Sasha only to discover that they’re not related?

Regardless, GH viewers won’t want to miss the twists that are in store. We’ll give you updates as other news comes in. Stay tuned to the ABC soap and don’t forget to check CDL often for the latest General Hospital spoilers, updates and news.