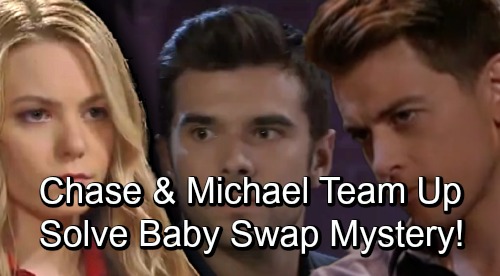 General Hospital spoilers tease that things aren’t going to get any easier for Michael (Chad Duell) as he continues to mourn the loss of his son. Michael was so caught up in the drama of taking Nelle (Chloe Lanier) down that he didn’t realize just how much he was looking forward to being a new dad. He really loved his little baby, and the grief is almost too much to bear.

Of course, viewers know that Michael’s baby actually survived and is currently happy, healthy, and living with Brad (Parry Shen) and Lucas (Ryan Carnes). The baby switch perpetrated by Nelle and Brad has Michael and everyone else fooled for now. So Michael continues to grieve for the baby he believes he lost.

But there’s another person who’s also heartbroken over Michael’s loss, and that’s Chase (Josh Swickard). Chase feels terrible that his plot to trap Nelle resulted in so much pain. But Michael doesn’t blame Chase for his baby’s death. Sure, Michael wishes things had gone down differently, and he blames himself to some extent, but ultimately he doesn’t hold anyone responsible for the tragedy. As far as everyone knows, the baby simply didn’t survive childbirth.

Michael and Chase are on decent terms right now, and GH spoilers say that the two men will grow closer. Over time, they’ll bond and become good friends, which will be especially good for Michael, who really needs a friend to help him through the grieving process.

Their friendship also may become important down the road, when clues inevitably start coming out about the baby swap. At some point, something’s bound to happen that will raise red flags with either Michael, Chase, or both. For example, if Obrecht (Kathleen Gati) is ever caught, she might offer a clue to Chase about the “wayward girl” that she helped give birth in the woods.

Or Brad might continue to act strangely around Michael, especially when baby “Wiley” is present. That could appear strange to Chase, and since he is a police detective, he may be better at putting the clues together than Michael. Chase may end up being vitally important in eventually reuniting Michael with his very-much-alive son!

Do you think Chase will be able to figure out the baby swap mystery? Stay tuned to the ABC soap and don’t forget to check CDL often for the latest General Hospital spoilers, updates, and news.