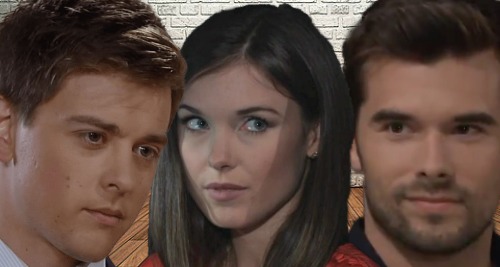 General Hospital (GH) spoilers tease that new love triangle is kicking off. Tuesday’s episode brought some awkward flirting for Willow (Katelyn MacMullen) and Chase (Josh Swickard). The poor guy is clearly a bit rusty, but Willow cut him some slack. She seemed to find his discomfort endearing and he’s certainly doing just fine in the looks department. Willow may consider giving Chase a shot.

However, Chase could have major competition thanks to Michael (Chad Duell). Lulu (Emme Rylan) warned Chase not to wait too long or else Willow could get snatched up. Unfortunately, it may already be too late. Michael and Willow met at a bereavement meeting, so they already feel united in grief. Their connection grew stronger when they ran into each other later and that trend will continue.

Of course, Chase may not give up on Willow. It’s not like Willow and Michael have started anything just yet, so there’s still time for Chase to make a bolder move. If Michael makes a move as well, who will Willow choose? There are pros and cons to being with either guy.

Willow had a more comfortable vibe with Michael, but their relationship could easily become a real downer. Who wants every date to be a pity party? Still, that may be what Willow needs right now. It all depends on how deep her grief runs and what she’s looking for in a partner.

If Willow would prefer a lighter romance to lift her spirits, Chase is the perfect fit. He’s the kind of guy who could flash those pearly whites and make her pain go away. Nevertheless, this love triangle is undoubtedly about more than just pairing up Michael or Chase. They’re both connected to Nelle (Chloe Lanier) and the baby drama, so Willow may provide another crucial puzzle piece.

General Hospital has introduced a female character when there are two mystery women in play: Nina’s (Michelle Stafford) real daughter and Wiley’s birth mom. Since the daughter chaos seems to be heading in another direction, that leaves the birth mother angle. Could Willow be the woman in question?

That’s a possibility to consider, especially if Julian (William deVry) got rid of her by revealing his side of the story. He doesn’t know about Nelle, but he realizes Brad swapped his dead baby with a living one. Julian thinks the other swapper was a woman who genuinely couldn’t take care of her kid.

Willow may be grieving for her deceased child, but she could also be the key to exposing Jonah’s survival. Whether Willow picks Chase or Michael, they’re both in the position to gather GH clues. Either of them could end up on the verge of a shocking story soon.