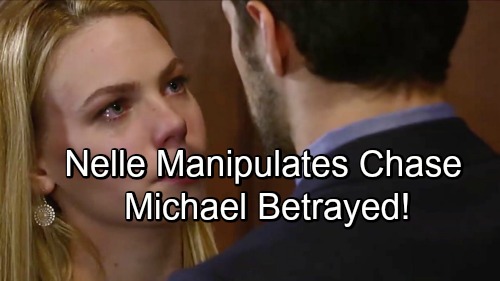 General Hospital (GH) spoilers tease that Michael’s (Chad Duell) trusting nature could get him in trouble again. He trusted Nelle (Chloe Lanier) and it cost him big time. Michael’s family paid the price, so he’s determined to stop the destruction. He’s hoping to give Carly (Laura Wright) her freedom and protect his child from Nelle’s dangerous manipulation.

However, pulling this off won’t be easy. It’s going to take a team effort and that’s why Chase (Josh Swickard) is involved. He’s equally determined to bring Nelle down – at least that’s the way is seems right now. Unfortunately, there’s no guarantee Chase will stick to the plan. Michael doesn’t really know him, so how can Chase be trusted?

After all, Chase kept secrets about his previous involvement with Nelle. That’s something he should’ve disclosed immediately. There may even be some truth to the whole stalker idea. Chase followed Nelle to Florida and later ended up in Port Charles, where Nelle also happens to reside.

Now Chase is obsessed with targeting Nelle, but is that because of his nearly destroyed career or his broken heart? Chase made an awfully convincing speech about his love for Nelle. It was part of his plot with Michael, but maybe there was some truth to it.

Does Chase still have feelings for Nelle deep down? If so, that could really botch things. Let’s say Chase indeed helps Michael (Chad Duell) fake his death and takes the next steps. Several General Hospital spoilers point to Nelle begging Chase for assistance later.

Plus, Chase and Nelle will have some emotional scenes right before Chloe Lanier’s last airdate. As the walls close in on Nelle, will she make a passionate plea? Will Nelle promise to leave the Corinthos clan alone if Chase will just let her go?

Nelle really knows how to turn on the waterworks and sell a sob story. She may convince Chase that she’s truly innocent of Zach’s murder. GH has never offered proof of Nelle’s guilt, so who knows? Perhaps she’s being honest for once.

Regardless, Chase may have a weak spot for Nelle. Michael’s been burned by the psycho repeatedly, so he knows better. Chase was just burned the one time, so he could be won over. He might take pity on Nelle and secretly help her vanish.

The good news is Nelle would be out of Michael’s life. The bad news is he wouldn’t get justice or peace of mind. Nelle could return and cause mayhem at any time. She’d risk getting caught, but that’s what crazy people do!

It’d be fun to leave the door open for chaotic comebacks. Will Chase spoil the scheme and give us that option? We’ll give you updates as other General Hospital details emerge. Stay tuned to ABC’s GH and don’t forget to check CDL often for the latest General Hospital spoilers, updates and news.