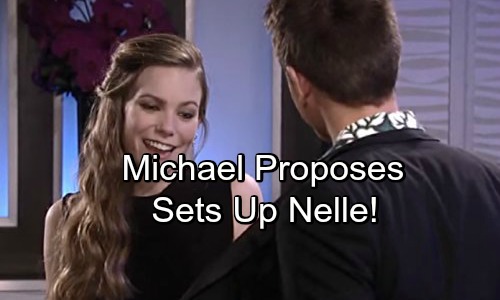 General Hospital (GH) spoilers tease that Michael (Chad Duell) will realize he has to do something big and bold. Nelle (Chloe Lanier) is still in the dark on Michael’s manipulation, but he’s had a few close calls. Michael needs to find a way to prevent those if possible. That’s going to be tough thanks to Nelle’s suspicious nature.

GH viewers know Nelle has trust issues thanks to her lying, manipulative father. Plus, she always fears getting caught in a scheme. When you live your life like that, there’s bound to be some paranoia. Nelle tends to eavesdrop and watch closely. She has to if she wants to protect herself and keep her tracks covered.

Of course, that makes Michael’s job a lot harder. He needs Nelle to drop her guard if he wants to expose her lies. General Hospital spoilers say Michael will come up with a plan to make Nelle feel completely secure. It’ll be drastic, but Michael will think it’s the only way to ease Nelle’s mind.

Before Michael goes through with his latest plot, he’ll have a chat with Jason (Steve Burton). Michael may provide some hints about what he’s planning. Once he Michael offers the scoop, GH fans can expect Jason to be a bit worried. He won’t want Michael to get in over his head, so he’ll warn him to be extremely careful.

Jason knows Nelle is dangerous and capable of just about anything. He’d hate to see Michael get hurt, killed or whatever else Nelle can come up with. She’s one twisted chick, so who knows what she could do to him?

Nevertheless, Michael will insist that he has to help Carly (Laura Wright). He let Nelle back in his life and got her pregnant, so he feels responsible for his mom’s suffering. Michael will hope to end this once and for all. To do that, he’ll have to put on quite a show and really sweep Nelle off her feet.

Michael’s already moved back in the Quartermaine mansion, so he’ll have to top that. Simply reuniting with Nelle wouldn’t be pulling out all the stops. Michael may be thinking about something even bigger. Is he about to propose to Nelle? Popping the question would be a surefire way to show Nelle he’s all in. If she feels safe and comfortable, she’ll inevitably make more mistakes.

Perhaps Michael will tell Nelle that with the baby coming, he’s reevaluated his priorities. Michael may mention the Chase (Josh Swickard) drama, too. He could argue that he wants to protect Nelle and their child forever.

Michael could make a phony speech about his growing love and ask Nelle to marry him. He could promise that he wants to be a united family and ask if she’s on board. Would Nelle fall for that? Is Michael underestimating Nelle or will indeed she feel like she’s getting everything she ever wanted?