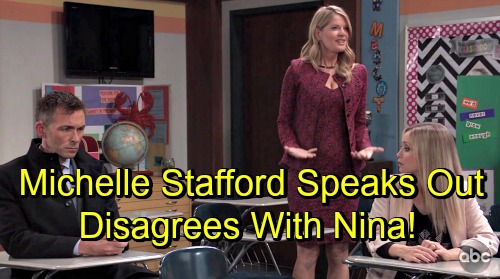 General Hospital (GH) spoilers tease that one ABC soap star is speaking out on a major storyline. Michelle Stafford (Nina) had some intense scenes recently, so she decided to address them on social media. She didn’t agree with what her character had to say, but she felt it was an important plot to put out there.

GH fans know Aiden’s (Jason David) been having some issues at school lately. Liz (Rebecca Herbst) and Franco (Roger Howarth) were desperate to find out the problem, but it took a while for Willow (Katelyn MacMullen) to come through for them. They just want Aiden to feel safe, confident and happy.

Thankfully, Ms. Tait has discovered Charlotte’s (Scarlett Fernandez) bullying. She quickly took steps to rectify it, although school policy says she can’t reveal other names to the parents. General Hospital fans watched Nina get awfully agitated in Friday’s episode. She barged in the parent-teacher conference uninvited and proceed to chew Willow out over her accusations.

Nina acted like Willow held an archaic view of women and suggested that she probably didn’t have children. She felt like Willow couldn’t relate to the situation at all. Despite Charlotte’s increasingly bold insults in class, Nina argued it was a simple case of having “leadership skills.” She insisted that being aggressive wasn’t a bad thing.

Clearly, Nina’s take isn’t a great one. She overstepped with Willow big time and doesn’t seem to care about the victim at all. That’s why Stafford wanted to speak out and make her personal views known. She sent out a tweet to set the record straight and highlight the important issue of bullying.

“Today’s air show was VERY hard 4 me to play,” Stafford said. “I disagreed with EVERYTHING my character was saying. But I committed! The story is very relevant and MANY parents cannot see that their child may be in the wrong. It’s a well written story and I am happy 2B THAT voice in it.”

General Hospital spoilers hint that Nina may shift her perspective in time, but there’s a lot more drama to play out first. GH viewers won’t want to miss all the twists and turns ahead. We’ll give you updates as other news comes in. Stay tuned to the ABC soap and don’t forget to check CDL often for the latest General Hospital spoilers, updates and news.