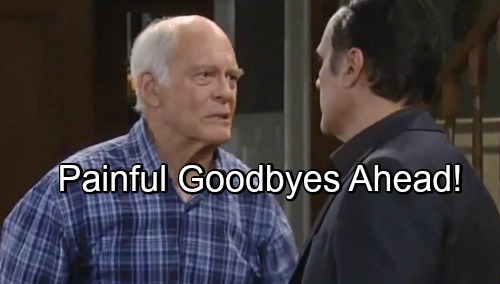 General Hospital (GH) spoilers tease that Mike Corbin’s (Max Gail) Alzheimer’s disease will soon reach its final state. Mike’s condition has been declining rapidly, so a heartbreaking decision’s ahead for Sonny Corinthos (Maurice Benard). He’s done his best to keep Mike safe and feeling at home in the Corinthos compound. Mike’s settled into a decent groove there, but it’s almost time for big changes.

Sonny hired Felix DuBois (Marc Samuel) as Mike’s nurse, so that helped for a while. However, Mike will soon become more than Felix than handle. Stella Henry (Vernee Watson) warned Sonny from the very beginning that Mike would need more care. At some point, Sonny will have no choice but to place Mike in a specialized facility.

Sonny and the Corinthos clan have had a tough summer so far. The threat of the missing body and gun still hangs over Sonny. He needs to score the evidence before Julian Jerome (William DeVry) finds it. Carly Corinthos’ (Laura Wright) Ferncliff stint has been a real nightmare as well.

Now Michael Corinthos (Chad Duell) is dealing with what he believes is the death of his baby. All of this has taken a toll on this GH family, but there’s one more blow to face. We should note that there are seven stages of Alzheimer’s disease. Unfortunately, Mike displayed symptoms of stage six during a recent confrontation with Felix. He thought Felix was an old enemy, so he battled plenty of paranoia.

In the near future, Mike will struggle to dress himself and stay clean. He’ll lose control of his bodily functions before long. The next stage Mike faces will be the final one. He’ll eventually lose his ability to speak, move and understand those around him. Mike won’t be able to feed himself and even breathing should become difficult. He’ll require constant care, supervision and assistance for basic tasks.

Many patients develop pneumonia, which is the most common cause of death in Alzheimer’s patients. In preparation for Mike’s continued deterioration and inevitable demise, General Hospital spoilers say Sonny will have to move him out. It’ll be a sad day when Sonny leaves Mike at his new facility, but it’ll be an even sadder one when Mike ultimately dies.

The end of Mike’s journey will be rough on the Corinthos family as well as GH fans, but at least the cast should deliver some fantastic performances. We’ll give you updates as other General Hospital news comes in. Stay tuned to the ABC soap and don’t forget to check CDL often for the latest General Hospital spoilers, updates and news.