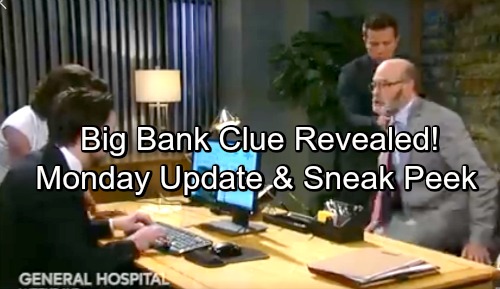 General Hospital (GH) spoilers update for Monday, April 23, tease that Ava (Maura West) will blow her top at the police station. She’ll toss around serious threats and make it clear that she means business. Ava was torn apart thanks to Avery’s (Ava and Grace Scarola) disappearance. She wants to make sure her child’s safe, so she’ll push for Mike’s (Max Gail) arrest.

Ava will undoubtedly know this will help her case in a custody battle. Jordan (Vinessa Antoine) will try to talk Ava out of it, but her mind will be made up. General Hospital spoilers say Mike will indeed be arrested for kidnapping Avery. Sonny (Maurice Benard) will have a hard time coping with his pain and anger. As for Ava, she’ll certainly face Griffin’s (Matt Cohen) wrath for this.

Meanwhile, Michael (Chad Duell) and Nelle (Chloe Lanier) will enjoy a nice chat. It’ll almost remind Nelle of old times. Michael will suggest that he has every reason to be optimistic about what’s ahead. He was caught off guard when Nelle announced her pregnancy, but he’s really looking forward to being a dad now.

Michael may even sense the potential for Nelle to be a good mom. General Hospital spoilers say their bond will grow stronger, so Nelle will be delighted. Now all she has to do is finish making Carly look insane. Nelle will hope that she can wrap this up and get her dream life moving along.

Elsewhere, Nina (Michelle Stafford) will recruit a model for a date with Peter (Wes Ramsey). She’ll try to get something going between Peter and a stunning woman named Riley (Rachel Goulding). It looks like Maxie (Kristen Storms) will show up and threaten to derail this scheme. Nina will do her best to salvage it, so we’ll see what she can accomplish.

Over with Valentin (James Patrick Stuart), he’ll want to make something perfectly clear to Peter. Valentin knows how persistent his wife can be. He’ll insist that Nina has caught on and could bring Peter down in a big way. Valentin will reiterate that Peter needs to get out of Port Charles or at least steer clear of Maxie. That’s obviously the main reason Nina’s going after him.

General Hospital spoilers say Anna (Finola Hughes) will face a tense confrontation, too. Robert (Tristan Rogers) will solve the puzzle and determine that Anna is Heinrik’s mother. GH spoilers state that Anna will confess that it’s true. She didn’t want to divulge her big news, but she’ll hope it’ll help Robert see why she has to defend Heinrik.

At the bank, Sam (Kelly Monaco) and Jason (Steve Burton) will get a warning. Spinelli (Bradford Anderson) will suggest that if they touch something, they’re dead. There’s been some buzz about major danger before this adventure wraps up. Spinelli may think explosives could be triggered!

Of course, Spinelli could really mean their plan is toast if they make a wrong move. Whatever the case, they’ll walk away unscathed and with a clue. Valentin will land in hot water thanks to something they find, so we’ll give you updates as other GH details emerge. Stick with the ABC soap and don’t forget to check CDL often for the latest General Hospital spoilers, updates and news.