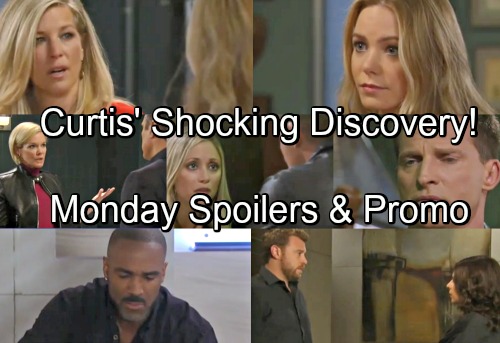 General Hospital (GH) spoilers for Monday, April 30, tease that Anna (Finola Hughes) will try to wrap her head around Robert’s (Tristan Rogers) news. He has reason to believe that Valentin (James Patrick Stuart) personally delivered Heinrik to Faison (Anders Hove). Robert will explain the situation and insist that Valentin needs to pay for this. He’ll be surprised by Anna’s strange reaction.

Robert will feel like Anna’s giving Valentin a pass on this, but that may not really be the case. Anna may just want to be smart about dealing with Valentin. She might think she can pry more info out of him and hopefully track Heinrik down.

Meanwhile, Nina (Michelle Stafford) will count on Curtis (Donnell Turner). She’ll be convinced that he can deliver the goods on Peter (Wes Ramsey). Nina would love to be wrong about this, but she just doesn’t think she is. Of course, Valentin will continue to dismiss Nina’s suspicions. He’ll do everything he can to downplay the drama, so he’s not going to be pleased when Curtis comes up with something.

In Peter’s office, Curtis will hit the jackpot. He’ll dig until he finds some info that could be incriminating. General Hospital spoilers say Curtis will fill Nina in on his discovery soon. Now that he’s working with Sam (Kelly Monaco), she should also get updates eventually.

For now, Sam will lead Drew (Billy Miller) away from Aurora Media so Curtis can finish the job. She’ll offer to buy Drew a cup of coffee and fill him in on all the latest developments. Sam will suggest that they have a lot to talk about, so Drew will undoubtedly agree. GH fans can expect some tension, but it’s important for Sam be honest and let Drew know where they stand.

Across town, Lulu (Emme Rylan) will want the scoop from Jason (Steve Burton). She’ll wonder if he found anything else on Heinrik. The Switzerland trip didn’t bring the revelations Jason hoped for, so he may share his disappointment with Lulu. He hasn’t discovered anything that points to Heinrik’s new alias, but at least he isn’t giving up.

Other General Hospital spoilers say Carly (Laura Wright) and Nelle (Chloe Lanier) will face off. It looks like Nelle will put on a bit of a show. She’ll probably feign concern about Mike (Max Gail) as well as the Avery (Ava and Grace Scarola) situation.

Nelle may insist that she tried to change Ava’s (Maura West) mind about seeking full custody. She might go on and on about how she only wants to help. Of course, Carly will see right through Nelle’s little act. She won’t think Nelle’s fooling anybody, so you can bet the haunting plot will rev up soon. Nelle will grow increasingly determined to get Carly out of the way.

Finally, Ava will give Sonny (Maurice Benard) an ultimatum. She’ll declare that she gets full custody of Avery or Mike’s going to prison. Sonny will have to make a big decision, so we’ll keep you posted as other GH details emerge. Stay tuned to the ABC soap and don’t forget to check CDL often for the latest General Hospital spoilers, updates and news.