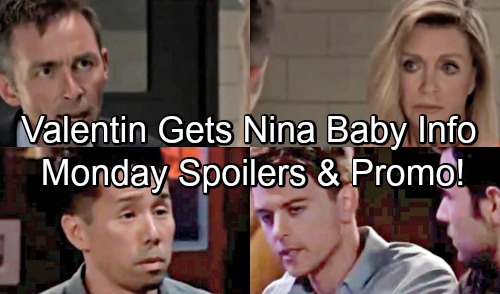 General Hospital (GH) spoilers for Monday, August 20, tease that Valentin (James Patrick Stuart) will have an important question to ask Madeline (Donna Mills). He’ll demand to know if Nina (Michelle Stafford) had a daughter, so GH definitely seems to be doing a long-lost child story. There were plenty of hints when Nina ranted about being stuck in a coma and losing her baby thanks to her evil mother.

Madeline is up for parole soon, so she tried to manipulate Maxie (Kirsten Storms) and Nina into helping her. That plan didn’t work, but maybe she can make a deal with Valentin. He’ll walk away from this exchange with hope for a reunion with Nina, so he’ll most likely get info on that daughter he mentioned.

Meanwhile, Nina will give Maxie a promotion. She’ll insist that it’s time for Maxie to take on more responsibilities at Crimson, so Maxie will quickly get on board. Over with Peter (Wes Ramsey), he’ll try to poach Lulu (Emme Rylan). Peter just purchased The Invader, so he needs journalists like Lulu to clean up its reputation.

General Hospital spoilers say Lulu will reject Peter’s offer, but perhaps he can change her mind eventually. Peter can be awfully persistent! Elsewhere, Brad (Parry Shen) will turn to Julian (William deVry) for help. The birth mom wants her baby back, so Brad will feel like he’s in over his head. He’ll share part of his story with Julian, but Lucas’ (Ryan Carnes) unexpected interruption will cause a delay.

However, Brad will reconvene with Julian later and admit this “Wiley” isn’t the real one. He’ll hope Julian can come up with some sort of solution, so Grandpa will give it his best shot. For now, Alexis (Nancy Lee Grahn) will hate to see Lucas and Brad in so much pain. It looks like Lucas will wonder if there’s anything Alexis can do, but she’ll suggest there are no easy answers here.

Other General Hospital spoilers say Drew (Billy Miller) will have a seemingly playful confrontation with Margaux (Elizabeth Hendrickson). It appears they’ll run into each other once again, so Drew may reiterate his stalking accusations. Margaux will call Drew a paranoid egomaniac, but he’ll smile and stifle a laugh. Drew will undoubtedly enjoy watching Margaux work herself into a tizzy.

Things should calm down between Drew and Margaux eventually, but he’ll certainly be keeping an eye on her. Margaux’s determined to take down Sonny (Maurice Benard), so Drew will want to monitor the situation. Monday’s episode will also bring a touching conversation between Chase (Josh Swickard) and Michael (Chad Duell). They’ll discuss “Jonah’s” burial as Chase tries to offer support.

Finally, it sounds like Sonny (Maurice Benard) will spill the Croton body drama to Carly (Laura Wright). She’ll be worried, but Sonny will argue that he got rid of the evidence. Mike (Max Gail) pitched in on that by moving it to another location, so now Sonny just has to make sure Julian never digs it up!