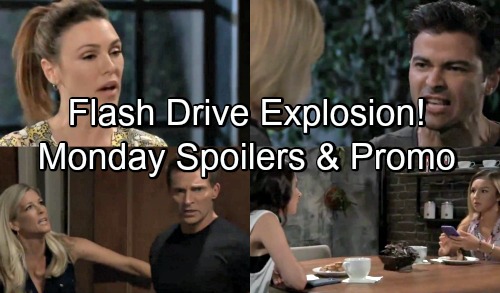 General Hospital spoilers for Monday, August 27, tease that Curtis (Donnell Turner), Jordan (Vinessa Antoine) and Stella (Vernee Watson) are headed to family counseling. The three certainly need some help, since Jordan is at the point where she doesn’t even want Stella to attend her wedding to Curtis! The three are shown greeting their therapist, portrayed by Chandra Wilson, and enduring their first moments of family therapy.

Meanwhile, Drew (Billy Miller) confronts Margeaux (Elizabeth Hendrickson) about the flash drive he found among her things at the Metro Court. Of course, Drew is probably wondering whether this is the infamous flash drive containing his memories.

Margeaux promises Drew that she’ll tell him everything he wants to know, but will she really spill the truth about what’s on the flash drive, or will she lie through her teeth?

Next, on the new GH episode, Monday, August 27, Griffin (Matt Cohen) confronts Ava (Maura West) about the blanket that she hid. Of course, this is the blanket that Nelle (Chloe Lanier) and Carly (Laura Wright) argued over before Nelle took a tumble down the Quartermaine staircase, and it was the evidence Carly desperately needed to stay out of Ferncliff.

Griffin yells at Ava, “you helped send Carly to Ferncliff, didn’t you?” What sort of action might Griffin take now that he possesses this explosive knowledge? If the Corinthos family should learn of Ava’s complicity she will face serious consequences – imagine if Jason learns about Ava’s role in Carly’s suffering and danger?

Also on Monday’s episode, Sam (Kelly Monaco) and Kristina (Lexi Ainsworth) have a serious-looking chat about something clearly important. Kristina looks reluctant to discuss the matter, and Sam says “if I didn’t know any better, I’d say you didn’t want to go.” What could they be discussing?

Finally, on Monday, August 27, chaos ensues at the Corinthos house, as guns are drawn in panic on Mike (Max Gail). It’s all a big misunderstanding resulting from a confused Mike sounding the house alarm after he thought he saw an intruder.

Poor Mike looks terrified, and GH spoilers say that Sonny will consider his next steps. Will he finally garner the courage to approach the topic of an assisted living facility with Mike?

It certainly sounds like some gripping scenes are coming up on Monday’s episode. Be sure to catch all the drama! Stay tuned to the ABC soap and don’t forget to check CDL often for the latest General Hospital spoilers, updates, and news.