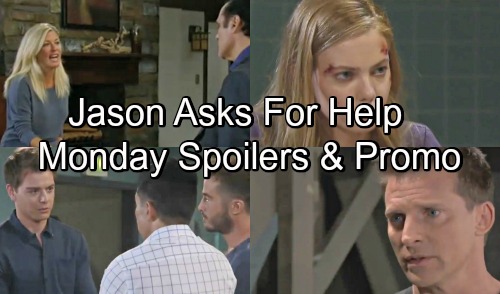 General Hospital (GH) spoilers for Monday, August 6, tease that Drew (Billy Miller) will approach Margaux (Elizabeth Hendrickson) for a conversation. He’ll suggest that they should probably set the record straight, so what’s this about? Drew might bring up something about Margaux’s memory-mapping curiosity, but this could also be about the chemistry between them.

Curtis (Donnell Turner) pointed out that Margaux seemed to like Drew. Since Drew’s single now, he might put himself out there. General Hospital spoilers say he’ll make an impressive gesture, so maybe he’ll ask Margaux to go out with him. A date night would be fun, especially since Margaux’s keeping that flash drive a secret!

Meanwhile, Ava (Maura West) will clutch her bag like her life depends on it. Julian (William deVry) will assume that something incriminating is inside. He’s absolutely right about that. Ava still has the blanket stashed in there, but she’ll hope to get rid of it soon. She’d better hurry before the cops start asking more questions.

Other GH spoilers say Jordan (Vinessa Antoine) and Nelle’s (Chloe Lanier) faceoff will continue. In the interrogation room, Jordan will push Nelle to do come clean. She’ll think that for once in her life, Nelle should do the right thing. Will Nelle make a full confession? Regardless, Jordan’s hoping she won’t cut a plea deal. She wants Nelle’s victims to have their day in court.

Speaking of Nelle’s victims, one of them will suffer more pain on Monday. General Hospital spoilers say Michael will hold “Wiley,” which actually baby Jonah. Brad (Parry Shen) will be nervous about letting Michael cuddle with his own son, but what can he do? Turning Michael down would be suspicious.

You can bet Michael will get emotional over this special moment. He’ll wish he were a father right now, so Brad’s guilt will intensify. At the safehouse, Carly (Laura Wright) will lash out at Sonny (Maurice Benard). She’ll contend that something’s going to take some time and that’s exactly what she doesn’t have.

Carly may be talking about Nelle’s looming conviction. Once Nelle officially goes down, that could certainly help Carly’s case. Until then, Carly won’t want to hide out in Canada for months. She’d much rather be home with her loved ones, so she’ll hope Jason (Steve Burton) can make that happen.

Over with Jason and Sam (Kelly Monaco), they’ll share some warm moments. As they chat, Jason will open up about some worries. He may fear that he’ll be arrested and miss out on more time with his family.

Jason tends to act first and think later when it comes to Carly. At the same time, he’d break her out all over again if he had to. Jason just couldn’t leave his bestie stuck in that nightmare. Fortunately, everything should work out in the end. Jason and Carly’s luck should start to turn around, so stay tuned.

It sounds like some fantastic scenes are coming up. We’ll give you updates as other GH news emerges. Stick with the ABC soap and don’t forget to check CDL often for the latest General Hospital spoilers, updates and news.