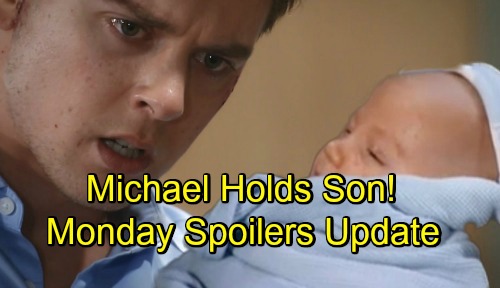 General Hospital (GH) spoilers update for Monday, August 6, tease that Ava (Maura West) will have an important meeting with Julian (William deVry). As she clutches her bag, Julian will grow a bit suspicious. He’ll suggest that Ava must have something incriminating in there, so she’ll let him see for himself.

Julian will disapprove when he realizes Ava has the blanket that could clear Carly (Laura Wright), but he should accept this as Ava’s usual antics. Talk will quickly turn to what’s going to happen next. Ava will want to put some distance between herself and this blanket. She’ll think it’d be best if it mysteriously appears somewhere else, so she’ll task Julian with making it happen.

While Julian mulls over Ava’s request, Michael (Chad Duell) will deliver one of his own. He’ll ask Brad (Parry Shen) and Lucas (Ryan Carnes) if he can hold their baby. Of course, GH fans know that “Wiley” is actually Jonah. That should make it tough for Brad as he puts the kid in Michael’s arms.

General Hospital spoilers say some emotional moments are on the way. Michael’s still grieving, so it’ll be difficult to think of what might’ve been. Over with Jordan (Vinessa Antoine), she’ll insist that Nelle (Chloe Lanier) needs to do what’s right. They’ll bicker as Jordan works to get an admission of guilt, which would make life easier at the PCPD.

Across town, Margaux (Elizabeth Hendrickson) will be surprised to see Drew (Billy Miller). He’ll have something he’d like to discuss with her, so they may cover a couple topics. Drew could tell Margaux was especially curious about his memory-mapping experience. He might fish for a little more info on why.

However, Drew may also be interested in Margaux. Curtis (Donnell Turner) thinks they’ve got a vibe going and some GH viewers see it, too. If Drew can gather up enough courage to ask, these two could end up on a date soon. Elsewhere, Jason (Steve Burton) will meet up with Sam (Kelly Monaco). They’ll get close as they talk about their dreams and fears.

Jason really stuck his neck out for Carly (Laura Wright). He’s a fugitive, so he could easily get caught and go to prison. Nevertheless, Jason will hope that doesn’t happen. He was away from Sam and his children for five years, so he’d rather not spend more time locked up and kept at a distance.

Carly will also be in panic mode at the safehouse. She’ll vent to Sonny (Maurice Benard) about how long it’ll take to clear her name. Carly will hope to speed the process along, which should be possible if the blanket reappears. It’ll be a soapy miracle if Nelle admits Carly didn’t shove her, but that’d be another surefire way to end this.