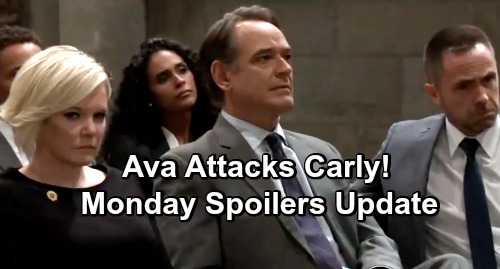 General Hospital (GH) spoilers for Monday, December 10, tease that Ava (Maura West) will be numb on the morning of Kiki’s (Hayley Erin) funeral. Julian (William deVry) will offer support and encourage Ava to attend with him. He’ll feel like she’ll regret it she doesn’t, but Ava will struggle to leave her penthouse. She’ll think if she attends this memorial service, it’ll make all of this real.

Soon after, Michael (Chad Duell) will drop by with Avery (Ava and Grace Scarola). He’ll insist that Avery needs to know what happened, but they all thought it’d be best if it came from Ava. Little Avery will ask her mom where Kiki is, so GH fans are in for some devastating scenes.

General Hospital spoilers say Ava will have to explain that Kiki’s gone and isn’t coming back. It’ll break her heart as well as Avery’s, but at least it’ll bring Ava a step closer to acceptance. Meanwhile, Jordan will make a suggestion to “Kevin” aka Ryan (Jon Lindstrom). As they head in for Kiki’s funeral, Jordan will wonder if the killer might show up to enjoy his handiwork.

“Kevin” will flash a creepy smile since he knows that’s indeed the case. He’ll love seeing just how much damage he’s inflicted with one horrible crime. Later, Kiki’s service will bring some conflict. Ava will be triggered by Carly’s presence and the reminder of Morgan (Bryan Craig). She’ll feel like Carly’s only there to make her feel guilty, but Carly obviously cared about Kiki, too.

Nevertheless, Carly won’t just stand there and take whatever Ava dishes out. She’ll fire back when Ava lashes out, so the tension’s definitely going to explode. At GH, Jason (Steve Burton) will let Oscar (Garren Stitt) know he’s going to be there for him. Alexis (Nancy Lee Grahn) informed Jason that Oscar wants him to be the executor of his will, so Jason will be all in. He’ll want to help Oscar with his last wishes.

Jason will push Oscar to just tell him what he wants. He’ll vow to make it happen if he can. Oscar’s hoping to avoid drama over the Quartermaine shares if he dies. He doesn’t want to leave behind a mess, so he’ll hope Jason can prevent it for him.

Other General Hospital spoilers say Drew (Billy Miller) will give Margaux (Elizabeth Hendrickson) a hard pass. He’ll suggest that he doesn’t need the flash drive back, but Margaux won’t understand. She’ll think Drew’s afraid, so she’ll wonder what the source of that fear is. Margaux may believe Drew’s worried about the memories he could get back and what they might contain.

There’s always a chance that something dark could be buried in Drew’s past, but Margaux will push him to take the risk. She’ll convince Drew to take the flash drive, so that’s step one on his memory journey. Over with Sonny and Carly, they’ll deal with Mike’s (Max Gail) latest problem. Sonny’s dad is smitten with a married woman and that’s not something Marcus (Nigel Gibbs) can get behind.

Marcus will insist that Yvonne’s (Janet Hubert) health has been endangered. He won’t want Mike to keep confusing her, especially when she’s already struggling to remember her husband. Marcus wants to be Yvonne’s rock right now, but Mike’s swooping in and stealing her heart.