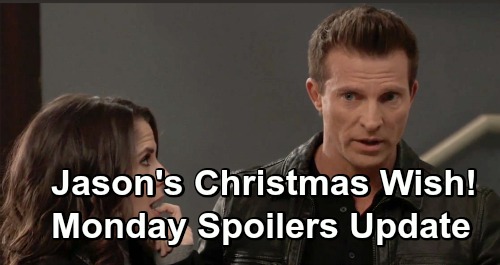 General Hospital (GH) spoilers update for Monday, December 17, tease that Lulu (Emme Rylan) will explain Charlotte’s (Scarlett Fernandez) side of the bullying situation to Liz (Rebecca Herbst). With Laura (Genie Francis) and Charlotte by her side, Lulu will push her daughter to tell Aiden (Jason David) she’s sorry. It looks like Aiden will be called down to hear Charlotte’s apology and hopefully put all the drama to rest.

Still, Charlotte’s caused a great deal of pain and that may be tough for Aiden to move past. He’ll need lots of love and support as he tries to gain some self-confidence. Later, Franco (Roger Howarth) will have another round of bad news. He’ll find out something that Liz isn’t going to like, but he’ll have to tell her anyway. They’ve made a commitment to being open and honest with each other.

General Hospital spoilers say Franco’s updates may have something to do with Cameron (William Lipton). The teen’s keeping secrets and that can only spell trouble. Despite calling off his weed deal, a series of poor choices and unfortunate events will land Cam at the PCPD eventually. Perhaps he’ll score some pot after all and get busted with it.

Over with Jason (Steve Burton) and Sam (Kelly Monaco), they’ll teach Danny (T.K. Weaver) about the joy of giving. After a lesson on toy drives, Danny will find out Jason’s coming home with them tonight. Jason wasn’t originally planning on it, but he certainly won’t pass up the chance. He adores hanging out with both Sam and Danny.

GH spoilers say Danny will take his parents hands and wish it could be like this all the time. Who knows? Maybe it will be someday soon! During a chat about Christmas, Jason will confess that he only has one thing on his list. He just wants to spend the day with Sam, so that should leave her with a full heart this holiday season.

However, Sam will also battle some anxiety. After Jason realizes Sam’s got a sudden phone obsession, he’ll wonder what’s up. Sam will ultimately admit this is about some strange emails. She’ll let Jason look at what’s coming in her inbox and worry about what it could lead to. Jason will be a bit freaked out as well, but he’ll offer reassurance. He’ll promise Sam that he’s going to watch out for her.

Jason will definitely be pitching in on Sam’s mystery case in the coming weeks. In the meantime, let’s talk about some Turning Woods drama. As Mike (Max Gail) leans in for a kiss with Yvonne (Janet Hubert) at the facility, Marcus (Nigel Gibbs) will stomp over to break it up.

Marcus will be disgusted with Sonny (Maurice Benard) and Carly (Laura Wright) for just standing there and watching this mistletoe moment play out. He’ll cause a scene, so Carly will do her best to calm him down. There’s a good chance her peacemaking efforts will fail miserably.

General Hospital fans can expect an action-packed episode, so don’t miss it. We’ll keep you posted as other GH details emerge. Stick with the ABC soap and don’t forget to check CDL often for the latest General Hospital spoilers, updates and news.