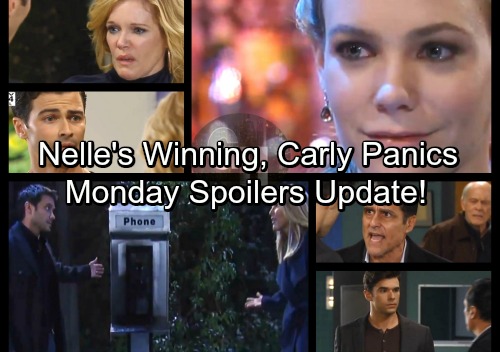 General Hospital (GH) spoilers for Monday, February 26, tease that Carly (Laura Wright) will remain on edge. Nelle’s (Chloe Lanier) phone calls and messages have really left Carly in distress. She’ll crumble as she vents to Jason (Steve Burton) near the payphone. Carly will just want to understand why all this is happening to her.

Jason always comes through for Carly when she needs him. He’ll be happy to look into this and offer support whenever she needs it. At the gallery, Ava (Maura West) will put everything on the line. She’ll explain her deep love for Griffin (Matt Cohen), but it seems he won’t be ready to make that declaration. 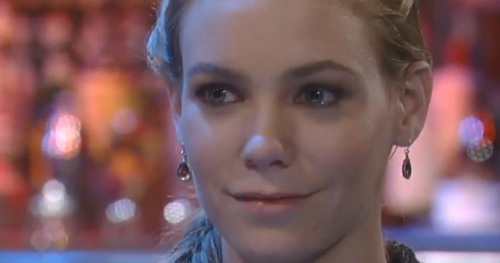 Ava will insist she probably wouldn’t believe Griffin if he said it now anyway. She doesn’t want him to reciprocate because he feels obligated. Ava will urge Griffin to think of her love as a gift he can carry around with him. If he can’t do that, Ava will want Griffin to break things off and make it quick. She won’t want to drag this out if Griffin’s spooked.

Griffin will likely assure Ava that he’s committed to her. The idea of a relationship is new for him, so he just needs a little more time. Griffin may ask Ava if she can be patient with him. At the police station, patience will be the last thing on Sonny’s (Maurice Benard) mind. He’ll want to get Mike (Max Gail) out of there ASAP. 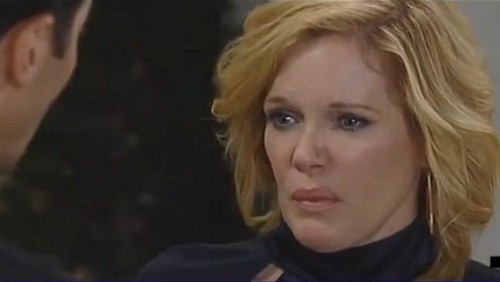 Sonny will rant at Detective Chase (Josh Swickard), who’s refusing to let Mike go home. If Sonny wants to take care of this mess, he’ll need Ava’s help. She’s one of his least favorite people, but Sonny will just have to suck it up. GH fans can expect Sonny to do some begging later this week.

Other General Hospital spoilers say Brad (Parry Shen) will make something perfectly clear to Julian (William deVry). After mentioning the looming adoption, Brad will promise that Julian will never be in the picture. Brad and Lucas (Ryan Carnes) seem to be on the same page about keeping Julian at a distance.

Meanwhile, Nelle will have high hopes. During a conversation with Josslyn (Eden McCoy), Nelle will admit she’s making progress with Michael (Chad Duell). She’ll hint that her child could grow up in a home with united parents. Josslyn will be stunned by Nelle’s confidence. She’ll wonder if there’s actually a chance that Michael will take Nelle back.

Nelle will certainly think so, but her plan’s awfully risky. When it comes to Nelle’s schemes, they tend to blow up in her face. We’ll give you updates as other General Hospital news comes in. Stay tuned to ABC’s GH and don’t forget to check CDL often for the latest General Hospital spoilers, updates and news.