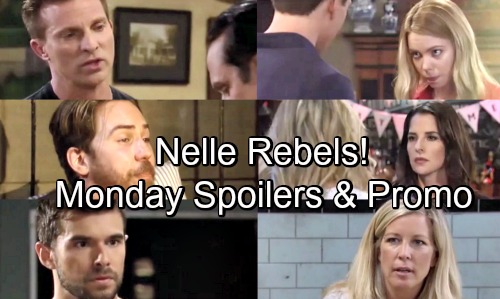 General Hospital (GH) spoilers for Monday, July 2, tease that Chase (Josh Swickard) will make a confession. He’ll come clean to Jordan (Vinessa Antoine) about his history with Nelle (Chloe Lanier) and his desire to see her brought to justice. Jordan may warn Chase to settle down and straighten up. He doesn’t want his career to be destroyed again and she doesn’t want any more PCPD scandals.

Meanwhile, Curtis (Donnell Turner) will have updates for Nina (Michelle Stafford). He’ll bring her up to speed on the Peter (Wes Ramsey) investigation, but she obviously knows a lot more than he does! Nevertheless, Curtis will assure Nina that Valentin (James Patrick Stuart) isn’t involved. He’ll want to put her mind at ease, but she’ll remain on edge over her own secrets.

At the cabin, Peter will beg somebody for help. He’s been hallucinating thanks to his infection and high fever, so he just had a disturbing vision of Maxie (Kirsten Storms). Will Peter have a vision of someone else on Monday? Regardless, nobody’s coming to Peter’s rescue just yet. He’ll remain tied up for a rough Independence Day later this week, July 2-6.

Other General Hospital spoilers say Maxie will grill Sam (Kelly Monaco). She’ll insist that it’s time to tell her what the plan is. Perhaps Maxie will sense that Sam has a new lead on Peter. Sam doesn’t know anything for certain, but she indeed has growing suspicions. Liesl and Nina were exhibiting some strange behavior at the baby shower, so Sam’s on the right track now.

At the Quartermaine mansion, Michael (Chad Duell) will stick to his goal. It looks like Nelle will have some doubts about the wedding, but Michael will manage to reel her back in. She may worry about his family’s reaction, but he’ll promise that he doesn’t care about the backlash. Michael will do everything he can to drop Nelle’s guard and make her believe in his commitment.

At Ferncliff, Carly (Laura Wright) will have that noisy neighbor on her mind. The mystery man’s knocking out an SOS signal constantly. He clearly needs help, but Carly’s in no position to give it. Nevertheless, her curiosity will grow stronger in Monday’s GH episode.

Carly will wonder why Kevin (Jon Lindstrom) is so adamant about her not engaging. She’ll ask if there’s any reason she should be worried about the guy next door. Kevin will likely reiterate that the other supermax patients are dangerous and there’s no need to anger Mary Pat (Patricia Bethune). Of course, there’s obviously much more to the story. Dark secrets should be exposed sooner or later!

Finally, General Hospital spoilers say Jason (Steve Burton) will have big news for Sonny (Maurice Benard). He’ll bring up the note that Nelle left for Carly. Spinelli (Bradford Anderson) was able to make the ink reappear, so that’s a nice start. At least they know Carly was telling the truth about the message.

Sonny will realize they have an advantage here. Nelle doesn’t know that they’ve scored this evidence, so maybe they can cook up a trap. We’ll keep you posted as other GH details emerge. Stay tuned to the ABC soap and don’t forget to check CDL often for the latest General Hospital spoilers, updates and news.