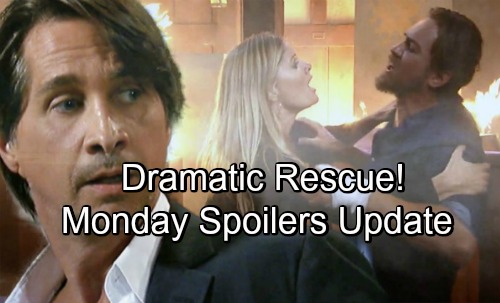 General Hospital (GH) spoilers update for Monday, July 23, tease that Margaux (Elizabeth Hendrickson) will reach out to Drew (Billy Miller). She’ll suggest that they have a little business to conduct, so Drew will express confusion. He won’t get why the DA would have dealings with his company, but she’ll explain everything. Margaux will likely leave Drew pleasantly surprised, so the bonding should continue.

Meanwhile, Julian (William deVry) and Kim (Tamara Braun) will reevaluate their relationship. It appears “Charlie” may jump the gun on some future talk. Julian has really fallen for Kim, so he could definitely see this lasting forever. Kim, on the other hand, won’t be as certain of what’s ahead. She can’t commit to spending the rest of her life with Julian, so living in the moment will have to be enough.

Oscar (Garren Stitt) and Josslyn (Eden McCoy) won’t be quite on the same page either. When Joss wants to take their chat upstairs, Oscar will seem a bit nervous about it. He may believe Josslyn’s ready to make love, which is an awfully big step. If Oscar pulls back when Joss is eager to dive in, there’s bound to be teen trouble.

Other General Hospital spoilers say Lucas (Ryan Carnes) will share his fears with Alexis (Nancy Lee Grahn). He’ll be looking for peace of mind as the adoption looms. Lucas and Brad (Parry Shen) are desperate to raise a son or daughter together, but they know their little one could be ripped away. The birth mom has a month to have a change of heart. She could take the baby if she decides she wants it after all.

Lucas will seek answers about some form of legal protection, but Alexis will insist that the contract can’t be renegotiated. They know the drill here, so they just need to hope it all works out. Lucas and Brad should have faith that their family’s going to happen.

At the Wyndemere stables, the fire will spread as Finn (Michael Easton) hunts for Peter (Wes Ramsey). He’ll call out for him as Maxie (Kirsten Storms) peers in nearby. She’ll be terrified for Peter, but relief is on the way. General Hospital spoilers say Finn will eventually haul Peter out and make sure he’s breathing. He’ll be glad to know Anna’s (Finola Hughes) son pulled through.

Peter will be rushed to GH, but he’s going to make a full recovery. Unfortunately, a new problem will emerge. Once Finn fails to get in touch with Anna, he’ll realize something terrible must’ve happened. The search for abducted Anna should be on soon!

It sounds like General Hospital has an excellent episode in store for us. We’ll give you updates as other GH news comes in. Stay tuned to the ABC soap and don’t forget to check CDL often for the latest General Hospital spoilers, updates and news.