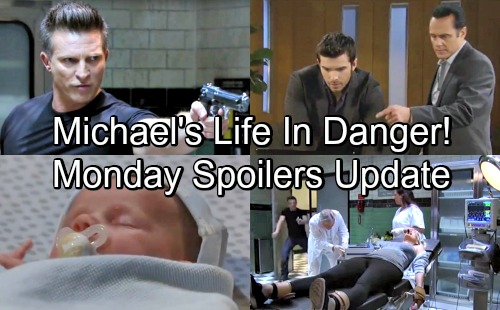 General Hospital (GH) spoilers update for Monday, July 30, tease that Sonny (Maurice Benard) will want to move fast. He’ll tell Chase (Josh Swickard) to get him the last position of the car. Sonny will hope to pinpoint exactly where the crash happened so they can save Michael (Chad Duell) and Nelle (Chloe Lanier) – well, at least her baby!

After Chase gets the location, they’ll be ready to roll. However, General Hospital spoilers say Jordan (Vinessa Antoine) will seek answers. As Chase leaves in a hurry, Jordan will step in front of him and demand to know what’s going on. She’ll undoubtedly freak when she hears how it all went wrong.

Chase will have to admit that he let Jordan down. The accident isn’t Chase’s fault, but he’ll still feel like it is. Chase will regret putting Michael in a stressful situation on the road, but the other car is really to blame here. It seems the driver lost control of the vehicle and veered into Michael’s lane.

General Hospital hasn’t revealed who might be behind the wheel or in the passenger seat. If Oscar (Garren Stitt) and Cameron (Cade McWatt) took an ill-advised spin, they might be inside. Some clues point in that direction. For example, Liz (Rebecca Herbst) will tell Kim (Tamara Braun) her troubles on Monday. She’ll point out that Franco’s gone radio silent and that can’t be good.

Kim will realize Liz expects trouble, so she’ll offer support. Of course, we can’t ignore the fact that these women are moms to Cameron and Oscar respectively. It may be significant that they’re having this conversation. They could get the stunning news together and perhaps end up clashing over who’s responsible.

At Ferncliff, Franco (Roger Howarth) will decide he needs to bolt. He got Jason (Steve Burton) in, so he’ll think that’s enough. Franco can’t hang around forever and risk getting thrown in the slammer. He’ll put the car in gear, so Jason and Carly (Laura Wright) may not make it in time to catch a ride.

Nevertheless, Jason will indeed save Carly from electroconvulsive therapy. General Hospital spoilers say Jason will tie up Dr. Lasaris along with his orderly. He’ll get Carly up and nudge her over toward the exit. When Dr. Lasaris argues that they’ll never make it out, Jason will seem pensive. It may be time for a new strategy!

Meanwhile, Brad (Parry Shen) will be on cloud nine with Wiley. He’ll gush over the kid at home and thank him for turning a promise into a reality. Wiley will sleep peacefully, but this is just the calm before the storm. GH fans can bet the baby bubble will burst pretty soon, so let’s hope Brad and Lucas (Ryan Carnes) can find a way to remain parents.

General Hospital has several action-packed scenes in store. We’ll give you updates as other GH details emerge. Stick with the ABC soap and don’t forget to check CDL often for the latest General Hospital spoilers, updates and news.