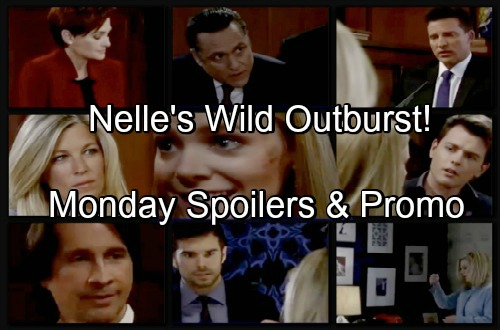 General Hospital (GH) spoilers for Monday, June 11, tease that Nina (Michelle Stafford) will head back over to the secluded cabin. She doesn’t want to leave Liesl (Kathleen Gati) alone with Peter (Wes Ramsey) for too long. It’s clear that Nina and Dr. O have very different ideas about what crosses the line.

Nina will find Liesl inflicting more torture, so she’ll quickly put a stop to it. She’ll be troubled by how far her ally is taking this. Nina hates Peter almost as much as Dr. Obrecht, but she doesn’t want him to end up dead or severely injured. General Hospital spoilers say Nina will have a hard time getting a grip on Liesl, but she’ll do her best.

Meanwhile, Maxie (Kirsten Storms) will gaze at the necklace Peter gave her before the Nurses Ball. As she pulls it out, Chase (Josh Swickard) will ask what it is. Once Maxie explains and opens up about how she’s feeling, Chase will undoubtedly offer some support. He’ll hate to see this widow in even more pain.

Other General Hospital spoilers say Anna (Finola Hughes) will invite Finn (Michael Easton) to stay for a while. They’ll both grin as they think about what might be in store. Finn will make love to Anna a little later, so it sounds like he’ll be glad he stuck around.

Back in Port Charles, there’ll be even more drama in the courtroom. Margaux (Elizabeth Hendrickson) will keep pushing Jason (Steve Burton) to assess Carly’s (Laura Wright) mental state. He’ll suggest that he can’t say if Carly’s insane, Margaux will ask if he can’t or simply won’t.

Fortunately, Jason will handle this one way or another. He always comes through for Carly, so there’s no reason for him to stop now. General Hospital spoilers state that the trial will wrap up soon. The judge will quickly deliberate and return with the verdict. Carly will be declared mentally unstable, but Margaux will demand that she be sent to Ferncliff instead of Shadybrook.

This isn’t good news since Ferncliff is a much harsher facility. Margaux will insist that Carly needs to be locked up with all the crazy criminals, so Sonny’s (Maurice Benard) sure to fume. He’ll rant that this case never even should’ve come to trial. However, Carly will have to accept her fate and get settled in Ferncliff later this week.

Finally, Nelle (Chloe Lanier) will have a wild outburst. It looks like it may be a nightmare based on Monday’s GH preview. Nelle will tell Michael (Chad Duell) that his ‘bitch’ mother’s getting exactly what she deserves. That doesn’t seem like a great way to win Michael over, so it’s doubtful this will really play out.