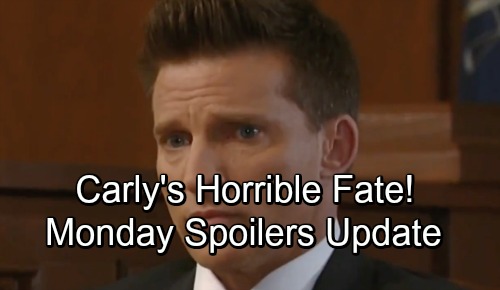 General Hospital (GH) spoilers update for Monday, June 11, tease that Nelle (Chloe Lanier) will feel like Carly’s (Laura Wright) getting what’s coming to her. She’ll even say so, but it appears it’ll be an imaginary confrontation. Nelle may have a nightmare about Michael (Chad Duell) turning against her. She’ll rant about his mother, which doesn’t fit with Nelle’s “poor me” strategy.

Perhaps Nelle will awaken and convince herself that everything’s going to work out. She’ll feel even more certain once Carly’s verdict comes in. Before we get to that, let’s talk about Jason’s (Steve Burton) time on the stand. Margaux (Elizabeth Hendrickson) will back Jason into a corner, so he may have to swear that Carly was insane and attacked Nelle.

It looks like Sonny (Maurice Benard) will grumble while the judge deliberates. General Hospital spoilers say he’ll take his frustration out on Diane (Carolyn Hennesy). Sonny will argue that she should’ve kept this case from going to trial, but there wasn’t much else she could do. If there’d been a way to get Carly off the hook, Diane would’ve used it.

Instead, Diane’s just hoping Carly will be declared insane and sent to a mental institution. She’ll get her wish for the most part, but there’ll be one major problem. Carly will be ordered to do a stint at Ferncliff, not Shadybrook. She’ll be put away with all kinds of criminal crazies at this strict state facility.

Other GH spoilers say Anna (Finola Hughes) will make a suggestion. She’ll wonder if Finn (Michael Easton) would like to stay in her room for a while. Finn won’t want to rush this or pressure Anna in any way. He’ll excuse himself and call it a night, but it won’t be long until he changes his mind. Finn will return for some hot love-making, so Anna should be pleased.

Back in Port Charles, Chase (Josh Swickard) will keep looking out for Maxie (Kirsten Storms). When she reveals a necklace, Maxie will seem a bit distraught. It seems it’s the same one Peter gave her at the Nurses Ball, so that’ll stir up plenty of emotions. Luckily, Chase will be there to lift her spirits and show some sympathy.

Speaking of sympathy, Nina (Michelle Stafford) will have some for Peter (Wes Ramsey) on Monday. General Hospital spoilers say Nina will discover Liesl (Kathleen Gati) torturing him again. She’ll take Peter’s gag and blindfold off before scolding her partner in crime. Nina will do whatever she can to make Liesl to ease up. She loathes Peter, but there’s still a limit to how much she’ll accept.

GH has another great episode in store. We’ll give you updates as other news comes in. Stay tuned to the ABC soap and don’t forget to check CDL often for the latest General Hospital spoilers, updates and news.