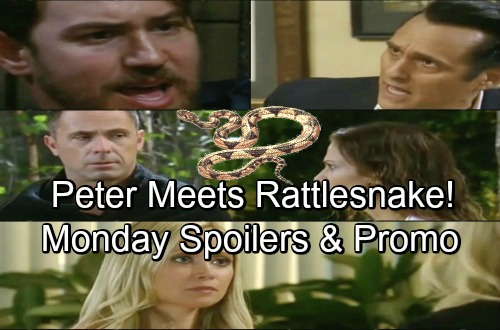 General Hospital (GH) spoilers for Monday, June 18, tease that Stella (Vernee Watson) will run into Curtis (Donnell Turner) and Jordan (Vinessa Antoine) again. She’ll mention their engagement and ask when the big day is. Of course, Stella has no intention of watching these two tie the knot. She recently hinted that a lot can happen between now and the wedding. Stella must have a scheme cooking up.

Meanwhile, Drew (Billy Miller) will spot a frazzled Nina (Michelle Stafford). He’ll think she seems pretty upset, so he’ll ask if she’s OK. Nina will tear up as she admits she’s far from fine. Will Nina come clean about the Peter (Wes Ramsey) situation? She knows Peter dropped the flash drive, which means it must be at the Metro Court just waiting to be found.

Drew deserves to know that, but it could mean ratting Liesl (Kahleen Gati) out. Nina might also have to incriminate herself. Of course, there’s a chance Nina could offer the info and tell Drew not to ask any questions. If Nina’s vague enough, maybe she can keep the secret under wraps a little longer.

However, Julian (William DeVry) and Kim (Tamara Braun) are currently the bigger threat. They bumped into Dr. O, who claims she’s taking some “me time” and finding peace in nature. Unfortunately, Peter started screaming his head off and there’s a good reason why. A rattlesnake is his new bed buddy, so Peter’s meltdown is certainly understandable.

Kim will look concerned by all the yelling. She’ll insist that someone’s in terrible trouble, but Liesl will brush it off. When the topic of rattlesnakes comes up, Dr. Obrecht will shut down that idea. She’ll argue that there aren’t any in the area, but Peter would beg to differ.

Will Kim and Julian rush over to help or will Liesl regain control of her plot? General Hospital spoilers say Dr. O will try to hide her trail on Monday. Whatever happens, she’ll want to protect herself from potential charges. As for Peter, he’ll gasp for breath during his snake showdown. As his new enemy inches closer, Peter will definitely worry about receiving a fatal bite.

Elsewhere, Maxie (Kristen Storms) will meet up with Lulu (Emme Rylan). She’ll wonder if there are any new leads on Heinrik, but Lulu may not have much to offer. Amy (Risa Dorken) will also offer words of wisdom in Monday’s GH episode, so perhaps she’ll catch up with Maxie as well.

Other General Hospital spoilers say Sonny (Maurice Benard) will lash out at Mike (Max Gail). He’ll want Mike to spill the rest of the story and let him get on with his life. Mike admitted he moved the body that was buried in Croton. Naturally, Sonny will want to know where it was taken. He’d like to make sure this is handled and finally put his fears to rest.

It sounds like some tense moments are on the way. We’ll give you updates as other GH news comes in. Stay tuned to the ABC soap and don’t forget to check CDL often for the latest General Hospital spoilers, updates and news.