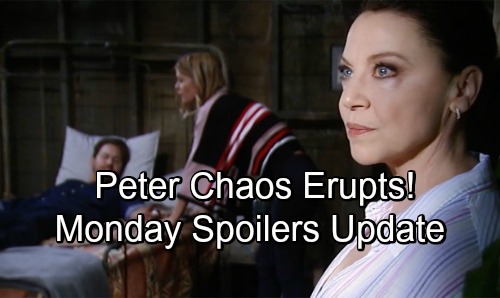 General Hospital (GH) spoilers update for Monday, June 18, tease that Maxie (Kirsten Storms) will wonder if there’s any news on Peter (Wes Ramsey). She’ll ask Lulu (Emme Rylan) if any Heinrik leads have surfaced, but she won’t have a lot to go on. Liesl (Kathleen Gati) managed to pull off the perfect, suspicion-free plot…until now.

Thanks to a rattlesnake, Peter’s currently losing it at the cabin. His screams can be heard all over the area, so Kim (Tamara Braun) and Julian (William deVry) will have concerns on Monday. General Hospital spoilers say Kim will feel like somebody’s in peril. Julian will agree and it appears they’ll speculate that a rattlesnake might be to blame.

Dr. Obrecht will contend that there aren’t any rattlesnakes around there. She’ll also try to dissuade Julian and Kim from searching. They’ll want to find the source of the screams, but can Liesl keep them away? She’ll certainly have a tricky task on her hands.

Dr. O will try to avoid exposure, but Nina will inadvertently cause another threat to the plan. She’ll slip up after she runs into Drew (Billy Miller) and apologizes for her role in the Peter drama. Nina will be sorry that she didn’t trust her instincts. She’ll also hate that Valentin (James Patrick Stuart) was in the loop on Peter’s true identity.

Nina will feel like she should’ve figure this out sooner, but Drew won’t hold her responsible. He’ll indicate that he was just as duped by Peter. As Nina runs down all the trouble Peter’s caused, she’ll mention the flash drive. That’ll be enough to raise suspicions for Drew. He’ll be curious how Nina knew about it, so she’ll have to think fast.

Back with Peter, that rattlesnake will present a deadly problem. As it slithers toward him, Peter will fear that the end is near. He could be a goner if Mr. Snake decides it’s time for a fatal bite. However, Peter should be OK in the end. GH has more in store for this character, so it looks like he’ll live to tell the tale.

Other General Hospital spoilers say Stella (Vernee Watson) will continue to stew. She’s not happy about Jordan (Vinessa Antoine) and Curtis’ (Donnell Turner) engagement, but she’ll attempt to keep the peace. Stella will wonder when their wedding’s happening. She’ll seek a date and wish them well, but we all know Stella’s bound to stir up more trouble.

Over with Mike (Max Gail), he’ll get an earful from Sonny (Maurice Benard). Now that Mike’s admitted to moving the body, Sonny will want to know where he took it. Mike may struggle to remember a location. His moments of lucidity tend to fade quickly, so Sonny may face more difficulties. He’ll berate Mike in Monday’s episode and suggest that he just wants to put this behind him.