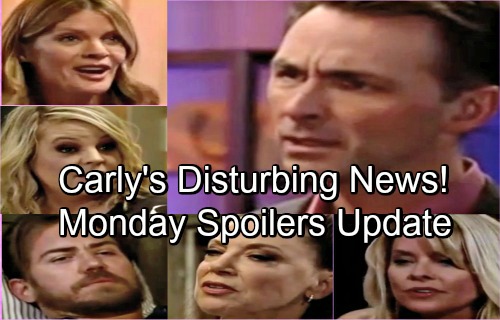 General Hospital (GH) spoilers update for Monday, June 25, tease that Nina (Michelle Stafford) will be appalled by Valentin’s (James Patrick Stuart) veiled threat. At least she thinks it’s a veiled threat! Nina suggested that Valentin might try to blackmail her, so she’ll call him out for being despicable. She’ll make it clear that this isn’t the way to her heart.

Valentin will furrow his brow and argue that Nina’s got it all wrong. There’s no evidence left in the Cassandra (Jessica Tuck) case and he doesn’t have enough info about Peter (Wes Ramsey) yet. Valentin will maintain that he just wants to help, but Nina should have her doubts.

GH fans will probably have their doubts, too! If Valentin discovers Nina’s role in the hostage situation, he may try to use it against her. All’s fair in love and war! Elsewhere, Felicia (Kristina Wagner) will console a heartbroken Anna (Finola Hughes). She’ll understand that Anna’s suffering without any form of closure. This mom just wants a chance to get to know her son and make amends.

Meanwhile, Jordan (Vinessa Antoine) will track down Maxie (Kirsten Storms). General Hospital spoilers say Maxie will assume this is about Peter, but she probably won’t have any more details to offer. However, Maxie will still appreciate the company. She’ll even ask Jordan for some guidance, so the trip won’t be wasted.

At the secluded cabin, Liesl (Kathleen Gati) will keep up her brutal tactics. Peter will seemingly lose the will to live, so he may wonder when Liesl’s going to kill him. He might argue that he’d rather be dead than tied to that bed indefinitely. Of course, Liesl’s having the time of her life. She’ll suggest that keeping Peter alive has more entertainment value, so he’ll just have to hang in there.

Other General Hospital spoilers say Sam (Kelly Monaco) and Curtis (Donnell Turner) will explain their actions. They just got busted by Margaux (Elizabeth Hendrickson), but they’ll manage to answer her questions and avoid the cops. Once Margaux accepts their explanation, she’ll sit on the couch to watch them work. Margaux will be anxious to see if Curtis and Sam can come up with any evidence.

While the P.T. team looks for Peter proof, Jason (Steve Burton) will express concern to Carly (Laura Wright) at Ferncliff. After a run-in with Kevin (Jon Lindstrom), Jason will believe their ally’s about to turn on them. He’ll think Kevin’s going to reveal their connection and get him thrown out.

Jason will indeed get caught pretty soon, but it doesn’t look like it’ll be Kevin’s fault. Perhaps Jason just won’t be sneaky enough to escape Mary Pat’s (Patricia Bethune) wrath. We’ll give you updates as other GH news comes in. Stay tuned to the ABC soap and don’t forget to check CDL often for the latest General Hospital spoilers, updates and news.