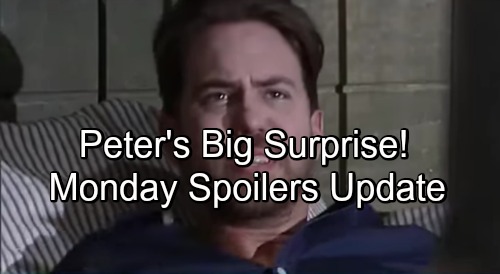 General Hospital (GH) spoilers update for Monday, June 4, tease that Peter (Wes Ramsey) will be shocked by Nina’s (Michelle Stafford) role in his suffering. He’ll believe she’s behind the kidnapping plot, but Nina should correct him. It wasn’t her idea, but she’s certainly on board now. There’s a good chance Nina’s assisting Dr. Liesl Obrecht (Kathleen Gati) with a scheme she cooked up.

At GH, Maxie (currently played by Molly Burnett) will break down over Peter’s apology note. As much as she wants to hate him, Peter’s making it tough. Meanwhile, Finn (Michael Easton) will question Anna (Finola Hughes) about Peter’s escape. She’ll act like this is the end of any relationship she might’ve had with her son. That’ll prompt Finn to wonder if Anna really believes she’ll never see Peter again.

Anna might confess that she hopes so, but she probably won’t be holding her breath. She’ll just be glad Peter isn’t behind bars for now. Across town, Drew (Billy Miller) will look over all the necessary documents for his memory procedure. He had a DNR drawn up in case he dies on the table. Drew doesn’t want to be kept alive if his brain gets fried during all this.

It appears Drew will make sure his final affairs are in order and accept that his last days could be near. He’s willing to move forward in spite of the risks, but Oscar (Garren Stitt) may attempt to change his mind. If Oscar gets updates from Kim (Tamara Braun), he might agree to try his luck.

Oscar will talk to someone on the phone this Monday. He’ll seem a bit upset as he discusses taking care of something. Oscar might be anxious about his dad’s potential death. If there’s a chance he can prevent it, he’ll want to do whatever he can. However, Drew probably isn’t budging on this. He may let Oscar know that he can’t go on living with Jason’s (Steve Burton) memories. Drew has to find his own.

Other General Hospital spoilers state that Sonny (Maurice Benard) and Nelle (Chloe Lanier) will have a tense confrontation. He’ll hint that maybe she could help out Carly (Laura Wright) since Nelle got everything she wanted. Nelle will basically say nice try, but no! She isn’t going to throw away her shot at making Carly suffer and getting her out of the way.

At Pentonville, Carly will fill Jason in on a request. She’ll want him to pitch in on something and he’ll gladly agree. Jason would do just about anything for his bestie! Elsewhere, General Hospital spoilers say Mike (Max Gail) will get some extra assistance. Perhaps Stella (Vernee Watson) will finally track down the perfect caregiver.

It looks like an action-packed episode’s on the way. We’ll keep you posted as other GH news comes in. Stay tuned to the ABC soap and don’t forget to check CDL often for the latest General Hospital spoilers, updates and news.