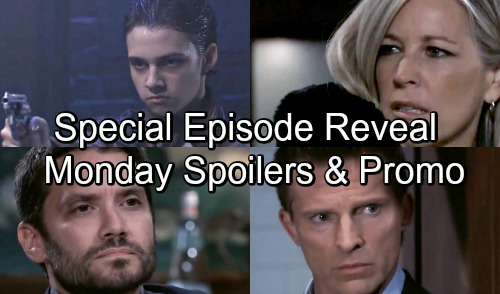 General Hospital (GH) spoilers for Monday, November 12, tease that Sonny (Maurice Benard) will have a startling dream. Margaux (Elizabeth Hendrickson) was understandably upset after prying a confession out of Jeanette (Ely Pouget). She drank herself into a stupor while reading her mom’s letters, so Sonny dragged her to the sofa and covered her up. He’s got a heart sometimes!

Now Sonny will have a chance to reflect on everything that’s happened. In fact, he’ll go back much further than this evening’s events. As Sonny contemplates his life and the tough choices he’s made, he’ll fall asleep and dream of what might’ve been. Sonny’s about to consider what his world would’ve been like without all the violence.

General Hospital will celebrate Benard’s 25th anniversary at GH with this Sonny special. They intend to explore an alternate version of Sonny’s history and ask “What if?” There’ll be some exciting guest stars to make things interesting. Dominic Zamprogna came back to film this one-day project, so that’s certainly a good reason to tune in. He’ll play a huge role in Sonny’s shocking fantasy.

Benard’s real-life son, Joshua Benard, will also pop up in this episode. He’ll play a younger version of Sonny in some fake flashbacks. Next, the show will tackle Sonny in adulthood. They’ll explore how different Sonny’s relationships would be without a life of crime. Dante will obviously be part of that, but Carly (Laura Wright), Michael (Chad Duell) and Anna (Finola Hughes) will also be involved in a big way.

Shelly Altman, one of GH’s co-head writers, previewed this episode in an interview with Soap Opera Digest. “Memory has become an important topic in the family and it seems like the right time and the right place for Sonny to have a day of self-reflection,” Altman said. She added that this dream will influence Sonny and potentially shape his next decisions.

“He will remember the content and is affected by it after the experience,” Altman teased. “And he has to reconcile how to move forward with the choices that he did make.” General Hospital spoilers say this will be a can’t-miss event, so GH fans should be pleased by what’s in store.

Are you looking forward to this special Sonny exploration? Will you be watching for Dante and all the surprises ahead? We’ll give you updates as other GH news comes in. Stick with the ABC soap and don’t forget to check CDL often for the latest General Hospital spoilers, updates and news.