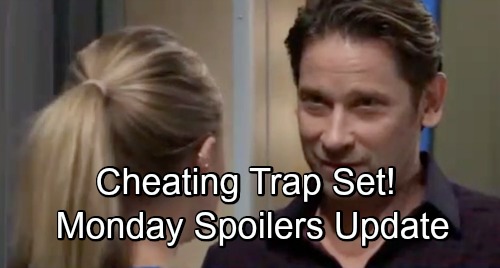 General Hospital (GH) spoilers for Monday, November 19, tease that Stella (Vernee Watson) will be blown away. Her old love, Marcus (Nigel Gibbs), will suddenly appear in Port Charles, so they should have a lot to catch up on. Curtis (Donnell Turner) located Marcus not too long ago with the hope of reuniting these two, but gave up on bringing Marcus to town since he was happily married.

Of course, things may have changed between then and now. It’s possible Marcus’ marriage wasn’t so happy after all! If he recently separated from his wife, that might give Stella a chance. Then again, maybe she’ll cheat and stop judging Jordan (Briana Nicole Henry) so harshly. Stella might see that everybody makes mistakes – especially on soaps!

For now, Stella and Marcus will simply do some chatting. Oscar (Garren Stitt) and Monica (Leslie Charleson) will do the same at the Quartermaine mansion. Since Oscar has been treated unfairly throughout his cancer ordeal, Monica will hope to rectify that. It’s not right for Oscar to be kept in the dark at his age. Monica will treat Oscar like an adult and ask if he wants to know what he’s up against.

Oscar’s seeking emancipation from his parents, so he’s obviously hoping for the freedom to make his own choices. Just having Monica talk to him with such honesty could help. Oscar may not back off his lawsuit just yet, but he might relent eventually. In the meantime, Kim (Tamara Braun) will remain a total mess. She’ll get upset with Drew (Billy Miller) when they can’t get on the same page this Monday.

GH fans know Kim can’t just give up and do nothing. She’s a devoted mother who’s world has revolved around her son for years. Kim will continue to do whatever she can to save Oscar’s life. Drew may stick with a more mellow strategy, which will rub Kim the wrong way. She feels like they need to fight for Oscar with everything they’ve got.

At Charlie’s Pub, it looks like Julian (William deVry) will talk to Sam (Kelly Monaco) about Lucas (Ryan Carnes). Although Lucas has agreed to give Julian another shot himself, Grandpa can’t get too close to “Wiley.” That was one of the birth mom’s conditions, so Lucas wants to honor that. Sam will be impressed when Julian indeed respects Lucas’ boundaries. She’ll think Julian’s doing the right thing.

Other General Hospital spoilers say Sasha (Sofia Mattsson) and Griffin (Matt Cohen) will land in bed together. That’ll be due to Ava (Maura West) and the drugs she gives them. Ava will also trick Franco (Roger Howarth) into believing a phony cheating story, so it won’t be long until he blabs to Kiki (Hayley Erin).

Kiki will admit that something might be going on, so she’ll try to get to the bottom of it. That’ll set her up for a horrifying discovery pretty soon. We’ll give you updates as other General Hospital news comes in. Stay tuned to ABC’s GH and don’t forget to check CDL often for the latest General Hospital spoilers, updates and news.