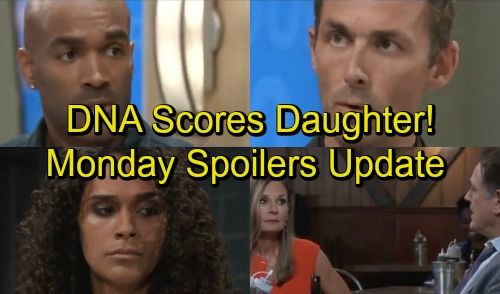 General Hospital (GH) spoilers update for Monday, October 1, tease that Margaux (Elizabeth Hendrickson) will give Jason (Steve Burton) a warning. She’ll let him know that the jig almost up for Sonny (Maurice Benard), but Jason won’t let her see him sweat. Margaux will insist that Sonny’s behind her father’s death. She’ll argue that Sonny pulled the trigger and Mike (Max Gail) cleaned up his mess.

Sonny will be shaken as Margaux closes in, but Jason will try to take care of all this GH drama. He won’t want Sonny to go down. That’s not the outcome Mike’s looking for either. Will he want to confess to the crime and help Sonny wiggle out of trouble? On Monday, Mike will talk to Carly (Laura Wright) about what’s going to happen next. That may be something he brings up during their chat.

However, Mike’s more pressing concern might be getting out of the house and into a memory care facility. He doesn’t want to be a burden, especially when things are already so chaotic for the Corinthos clan. Over with Nina (Michelle Stafford), she’ll face Lulu’s (Emme Rylan) questions about Valentin (James Patrick Stuart). Nina may be asked about the love she obviously still has left in her heart.

Unfortunately, Nina won’t think that’s enough to keep their relationship alive. She’ll contend that she just can’t get past the mistakes Valentin made with Peter (Wes Ramsey). Will Valentin’s search for Nina’s daughter change her mind? Time will tell, but Valentin will at least get the confirmation he’s longing for. Thanks to Curtis (Donnell Turner), Valentin will learn that the DNA tests were a match.

According to two sets of results, Sasha (Sofia Mattsson) is Nina’s daughter. Something tells us there’ll be more to the story, but Valentin and Curtis will trust the results for now. General Hospital spoilers say won’t be long until Valentin is ready to spill the good news.

Elsewhere, Lucy (Lynn Herring) just won’t be able to leave Ryan (Jon Lindstrom) alone. He’ll be exasperated when he finally breaks away from her nonstop gabbing. Ryan will inevitably settle on a murder victim or two soon. Could Lucy become a target? Kevin’s (Jon Lindstrom) brother is a deadly threat, so anyone he interacts with could be in danger.

Later, Laura (Genie Francis) will surprise “Kevin” by returning from her trip early. She’ll plant a kiss on him, so he’ll have to think fast. Ryan will face difficulties as he steps into this husband role, but he’s great at adapting. He’ll be able to pass as Kevin for now, so Laura could be at risk, too.