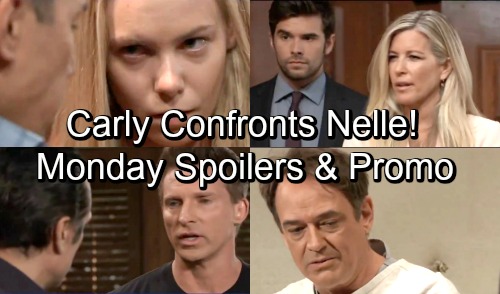 General Hospital (GH) spoilers for Monday, October 15, tease that Franco (Roger Howarth) will bump into a glum Drew (Billy Miller). He’ll sense that Drew could use someone to talk to, so he’ll offer himself as an option. Franco and Drew have managed to form a strange friendship. They care about each other in a weird way, so Drew should appreciate the effort Franco’s making.

However, Drew has problems that he may not want to talk about. Between the Oscar (Garren Stitt) drama and his Margaux (Elizabeth Hendrickson) dilemma, he’ll have a lot to mull over. Meanwhile, Liz (Rebecca Herbst) will pay Sam (Kelly Monaco) a visit and bring up Jason (Steve Burton). She’ll hint that maybe Sam should pump the brakes on a “JaSam” reunion and make things easier for Drew.

Sam will struggle to believe what she’s hearing. She’ll wonder if Liz seriously came there to tell her to stay away from Jason for Drew’s sake. Liz will smirk and suggest that’s not exactly what she means. She’ll probably contend that they all just have to rally around Drew right now. His son is dying, so he’s the priority.

Across town, GH spoilers say Carly (Laura Wright) will be a bit confused. As Nelle (Chloe Lanier) stares down Brad (Parry Shen) outside the courtroom, Carly will step closer to them. She won’t understand why Nelle would recognize “Wiley.”

Of course, Brad can just argue that Nelle knew he was getting a baby and assumed this was him. That’s not the whole truth, but it’s perfectly reasonable. Over with Jason, he’ll give Sonny (Maurice Benard) plenty of support. Jason’s hoping they can show Margaux her dad’s true colors and convince her to back off. He’ll reiterate that DA Dawson’s father was not an innocent victim.

Sonny will have concerns about making matters worse, but this plan is his best option right now. He’ll just trust that Jason can come through for him as usual. At Ferncliff, Ryan (Jon Lindstrom) will pop over to see Kevin (Jon Lindstrom). He’ll ease up on the drugs, so he’ll be able to have a conversation with his brother.

Kevin will insist that he could still help Ryan. He’ll beg his evil twin to let him, but Ryan just won’t be interested. It’s clear that Ryan’s having far too much fun! General Hospital spoilers say Ryan will share big plans with Kevin before drugging him up again. It’ll be a while before Kevin can get out of this horrible jam.

Finally, General Hospital spoilers say Laura (Genie Francis) will be distraught. It looks like “Kevin” will manage to upset her again, so she’ll get pretty fed up. With tear-filled eyes, Laura will demand to know what he’s done with her husband.

It sounds like Ryan’s mess will get even messier, so don’t miss the intense scenes ahead. We’ll give you updates as other GH news comes in. Stay tuned to the ABC soap and don’t forget to check CDL often for the latest General Hospital spoilers, updates and news.