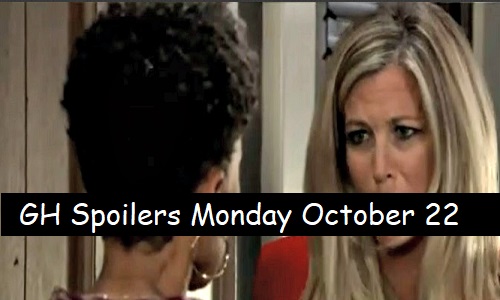 General Hospital (GH) spoilers for Monday, October 22, tease that Alexis (Nancy Lee Grahn) will drop by Charlie’s Pub. She’ll want to see her bartender daughter and offer some news regarding her future. Kristina (Lexi Ainsworth) is eager to find a new path, but she’s hesitant to let Alexis run her life. We all know Alexis can be a bit overbearing when it comes to Kristina and her choices.

Nevertheless, Kristina should be curious. She’ll listen to what Alexis has to say and consider her options. Unfortunately, a crushing blow will be dealt later. GH spoilers hint that Kristina will get some disappointing updates, so stay tuned for her latest round of drama.

Meanwhile, Josslyn (Eden McCoy) will prep Cameron (William Lipton) for Operation: Fake Boyfriend. She’ll insist that when you really want something, you should fight for it. Joss wants Oscar (Garren Stitt), so she’s using this scheme in hopes of getting him back. Oscar should be shocked when he finds out they’re “dating.” He’s been plotting with Cameron, so he’ll wonder what his frenemy thinks he’s doing.

Other General Hospital spoilers say Sonny (Maurice Benard) will take stock of Mike’s (Max Gail) mental state. He’ll ask Mike what he really thought about something, so he’ll be trying to get a grip on his father’s feelings. Mike’s been checking out a new facility, but this transition isn’t easy. Sonny may want to make sure his dad’s OK and squeeze in a little more bonding time.

Over with Carly (Laura Wright), she’ll have a chat with Stella (Vernee Watson). Carly will suggest that someone has to step up. She’ll argue that she should be the one to do it, but Stella may offer a warning. Their conversation could be about Michael (Chad Duell) and his lingering Jonah grief.

Stella might want Carly to be careful about how hard she pushes her son. Michael’s still trying to deal with things in his own way, so it’s wise to be cautious. Of course, Carly could also want to pitch in on the Mike situation. Stella’s wrapped up in that as well, so she’ll provide guidance no matter what.

At GH, Laura (Genie Francis) will corner “Kevin” aka Ryan (Jon Lindstrom) and insist on hashing things out. She’ll contend that something’s going on with him, so it’s time to address it. Laura will refuse to leave until “Kevin” gives her some answers. It sounds like Ryan’s mess will get messier, so don’t miss his attempt to wiggle out of it.