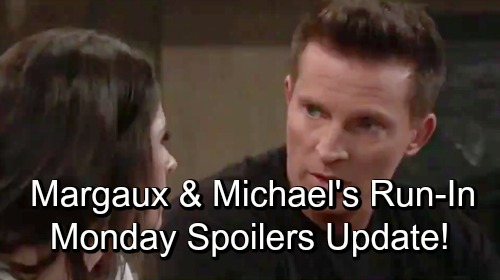 General Hospital (GH) spoilers update for Monday, October 29, tease that Michael (Chad Duell) will have a run-in with Margaux (Elizabeth Hendrickson). The DA’s determined to get dirt on Sonny (Maurice Benard) and put him behind bars, so she’s hounding his family members. Michael should stay tight-lipped, but Sonny still isn’t going to like this. He’ll realize Margaux’s vendetta is spiraling out of control.

Sonny will also be there for Michael in his time of need. They’ll enjoy some father-son bonding moments and a couple drinks. Michael will continue to drown in his grief, but having Sonny’s support should be nice. His dad can’t take away his pain, but knowing his family’s behind him can’t hurt.

Meanwhile, Curtis (Donnell Turner) will have Stella (Vernee Watson) on his mind. He’d love for his auntie to be at his upcoming wedding, but she just isn’t interested. Stella’s hatred for Jordan matters more than her love for Curtis right now. General Hospital spoilers say Curtis will hope to change Stella’s mind, but he’s got his work cut out for him.

Elsewhere, Anna (Finola Hughes) will shock Finn (Michael Easton) with her latest GH scheme. She’ll hope to use Britt (Kelly Thiebaud) as bait and draw Liesl Obrecht (Kathleen Gati) out of hiding. Anna will push Finn to play a crucial role in what comes next. He won’t be happy about that since it apparently involves some medical drama.

Finn doesn’t like going against the Hippocratic oath, but he may have to. Since he cares about Anna and wants her to succeed, it looks like Finn will suck it up and get involved. As for Anna, she’ll make her way over to see Britt in prison. Britt will kick off her new stint on Monday, but the details of the deal Anna’s offering will come later.

Other General Hospital spoilers say Carly (Laura Wright) will be pushed to her limit. Mary Pat (Patricia Bethune) will bicker with the former Ferncliff patient again, but far worse trouble’s brewing. There’s a good chance Mary Pat will be dead before long!

Kevin (Jon Lindstrom) will feel hopeful thanks to Laura (Genie Francis) and Carly’s Ferncliff evaluation. They’ll be sniffing around, so Kevin might realize it eventually. He may even call for their help, but he’s not going to get it. Ryan (Jon Lindstrom) will win this round and the next few as well.

Mary Pat will find herself dragged into a mess soon, so Ryan will most likely murder her. A stunning demise will indeed rock Port Charles before the week’s over. We’ll give you updates as other GH news comes in. Stay tuned to the ABC soap and don’t forget to check CDL often for the latest General Hospital spoilers, updates and news.