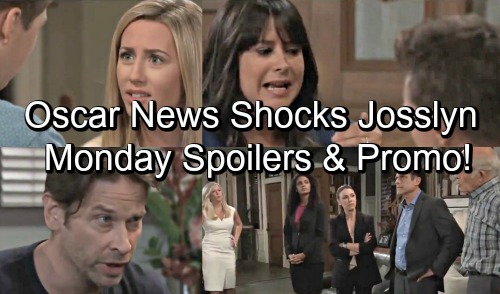 General Hospital (GH) spoilers for Monday, September 17, tease that Cameron (William Lipton) will cause more trouble for Liz (Rebecca Herbst). When she learns that Oscar’s (Garren Stitt) been in his orbit, she’ll have a weird reaction. Naturally, Cam just won’t get it. He’ll wonder why Liz cares if he hangs out with Oscar. After all, Liz was pushing him to do it not too long ago.

However, Liz may fear that unruly Cameron will stress Oscar out and aggravate his condition. She’ll keep the brain tumor a secret from Cam, but he’ll hide one as well. Cameron will want to keep that fight under wraps as long as possible. Of course, it won’t take long for Liz to put it all together. Kim (Tamara Braun) and Drew (Billy Miller) are busy scolding Oscar for using his fists across town.

Once Oscar’s lecture wraps up, he’ll share the news of his brawl with Josslyn (Eden McCoy). She’ll be concerned when she hears the reason for it along with the identity of his sparring partner. While the teens talk it out, Drew and Kim will do the same. They recently tabled their discussion to deal with the Oscar drama, but Drew will think they have some unfinished business.

General Hospital spoilers say Kim and Drew will reach an agreement. Perhaps this involves when they’ll tell Oscar about his deadly diagnosis. If they could give him a month or even a couple weeks to prepare, that’d be something. Nailing down when his demise will happen won’t be easy, but they could give it their best guess.

Elsewhere, Robin (Kimberly McCullough) will catch up with Jason (Steve Burton). It’s always nice to see these two in scenes together. Robin will rant about a hideous injustice that’s been done. She’s considering the idea of giving Peter (Wes Ramsey) a chance, but she still sympathizes with Jason. He returned to his old life for the most part, but he never really got payback for the five years he lost.

Over with Mike (Max Gail), he’ll be in a tricky situation. Jordan (Briana Nicole Henry) and Margaux (Elizabeth Hendrickson) just showed up with questions, so Sonny (Maurice Benard) and Carly (Laura Wright) will be in protective mode. General Hospital spoilers say Carly will ask what they’re implying. She’ll wonder if Margaux and Jordan really think Mike had something to do with that body.

At GH, Franco (Roger Howarth) will sit down with Ryan (Jon Lindstrom). When “Kevin” exhibits some strange behavior, Franco will claim to know what he’s up to. He’ll most likely think “Kevin’s” trying some psychological tactic to help him prepare for step-fatherhood. Franco wants to be a good role model for Liz’s boys, so that’s probably what this session will be about.

Ryan will play it cool and fool his patient for now, but Franco’s suspicions could rev up later. We’ll give you updates as other GH details emerge. Stay tuned to the ABC soap and don’t forget to check CDL often for the latest General Hospital spoilers, updates and news.