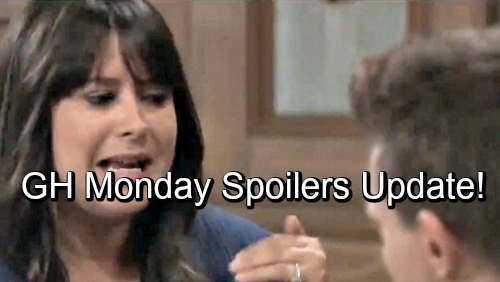 General Hospital (GH) spoilers update for Monday, September 17, tease that Sonny (Maurice Benard) and Carly (Laura Wright) will rush to Mike’s (Max Gail) defense. Jordan (Briana Nicole Henry) and Margaux (Elizabeth Hendrickson) just arrived to grill Mike about the corpse under Charlie’s Pub. They’ll think he could offer some crucial info, but Carly will argue that this is ridiculous.

Sonny will back Carly up as they work to get rid of their visitors. They’ll assure Margaux and Jordan that Mike isn’t in the loop on anything shady. That’ll be a lie, but they have to do whatever it takes to protect Mike from the fallout.

Speaking of fallout, Cameron (William Lipton) and Oscar’s (Garren Stitt) fight will continue to make waves. Josslyn (Eden McCoy) will be horrified when Oscar admits to the scuffle and why he started it. She’ll be sorry about the kiss, but Oscar probably won’t blame her. Cameron took responsibility for that lip lock, so Oscar and Joss should get back on track quickly.

At GH, Cameron will try to dodge his mother’s questions. He’ll lie about his brawl, but Liz should solve the puzzle at some point. Once Liz realizes Oscar and Cameron have been butting heads, her reaction will be pretty bizarre to Cam. He won’t get why Liz seems so concerned about Oscar’s well-being.

Suspicions should grow for Oscar soon, too. Drew (Billy Miller) and Kim (Tamara Braun) aren’t doing a very good job of hiding their fears. Nevertheless, Kim will insist on keeping quiet about Oscar’s condition. Drew will meet up with her to reevaluate the plan and negotiate a deal. They’ll want to lock in the terms of what’s allowed and maybe figure out when they’ll eventually fill Oscar in.

Across town, Robin (Kimberly McCullough) and Jason (Steve Burton) will enjoy some bonding time. They don’t get to see each other often, so they cherish their chats. Robin will be distressed by something as they talk. She’ll declare that a hideous injustice has been done, so she may be upset about Jason’s situation. Despite the fact that Jason missed five long years, Peter (Wes Ramsey) walked free.

Since Robin might let Peter in her life someday, she may want to clear the air with Jason. He’s an understanding guy, so he wouldn’t hold that against her. If Robin and Peter form a connection down the road, Jason can easily find a way to accept that.

Other General Hospital spoilers state that Franco (Roger Howarth) will barge in Kevin’s (Jon Lindstrom) office. He’ll assume Ryan (Jon Lindstrom) is the real doc, so it’ll lead to some awkwardness. Of course, Ryan’s a pro an impersonating his brother. He’s catching on fast, so he’ll quickly figure out what to say to Franco.

It sounds like some fantastic scenes are coming up on General Hospital. We’ll give you updates as other GH news emerges. Stick with the ABC soap and don’t forget to check CDL often for the latest General Hospital spoilers, updates and news.