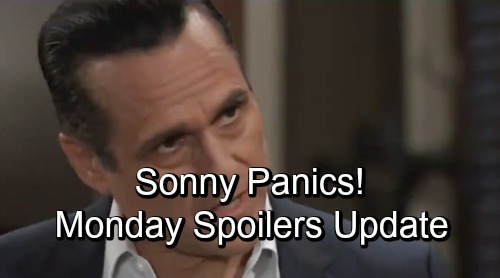 General Hospital (GH) spoilers update for Monday, September 24, tease that Sonny (Maurice Benard) will be in panic mode. He’ll finish his confrontation at the police station and corner Mike (Max Gail). Sonny will insist that his father needs to share everything he recalls. They need to get a grip on the details of the case Margaux (Elizabeth Hendrickson) and Jordan (Briana Nicole Henry) are working to solve.

While Mike struggles to remember the past, Margaux’s rage will take over. She’ll have a very emotional reaction to all the latest developments. Margaux now knows the body under Charlie’s Pub was her dad. After Sonny takes off, Margaux will rant about taking down her father’s killer. She’ll have tears in her eyes as she wrestles with her anger.

Jordan will console Margaux and assure her that it’ll all work out. She’ll be confident in their abilities, but Margaux will want payback sooner rather than later. Over with Kim (Tamara Braun) and Drew (Billy Miller), they’ll talk to Terry (Cassandra James) at GH. The doc will contend that some tough choices have to be made.

Oscar (Garren Stitt) doesn’t have long to live, so Drew’s pushing Kim to tell him immediately. He intends to do it himself if she can’t get on board. However, they’ll also discuss any last-ditch treatment plans Terry comes up with. If there’s any glimmer of hope Terry can offer, these fearful parents will want to hear about it. It’s clear that Kim and Drew are getting desperate.

Kim will plan to come clean with Drew later, but the beans have already been spilled. Cameron (William Lipton) was under the assumption that Oscar knew about his cancer. He accused Oscar of being unfair to Josslyn (Eden McCoy) and blurted it out.

After Oscar gets the full scoop on Monday, he’ll have a hard time wrapping his head about it. Nevertheless, Oscar will insist that Joss can’t know yet. He’ll want Cam to keep his mouth shut if he cares about Josslyn at all. Oscar deserves a chance to process this and share it in his own way. Cameron may understand that and give Oscar that chance, but he won’t wait forever!

Other General Hospital spoilers say Jason (Steve Burton) will have concerns. He’ll sense that Sam’s (Kelly Monaco) holding back when she doesn’t want to. Jason won’t like the idea of Sam bearing this burden alone. He’ll suggest that this seems significant and promise that she can tell him anything. Sam doesn’t want to betray Drew’s trust, but she may be tempted to share the crushing news about Oscar.

Over with Carly (Laura Wright) and Franco (Roger Howarth), they’ll have a disagreement regarding Liz (Rebecca Herbst). General Hospital spoilers say Carly will be upset about something. She’ll call Liz a hypocrite, but Franco just won’t think that’s true. He’ll want to settle Carly down and get to the source of the trouble.

GH viewers will see loads of drama in Monday’s shocking episode, so stay tuned. We’ll give you updates as other news comes in. Stick with the ABC soap and don’t forget to check CDL often for the latest General Hospital spoilers, updates and news.