General Hospital Spoilers: Monica Gets Through To Oscar – Gives Grandson Hope For Life After Cancer 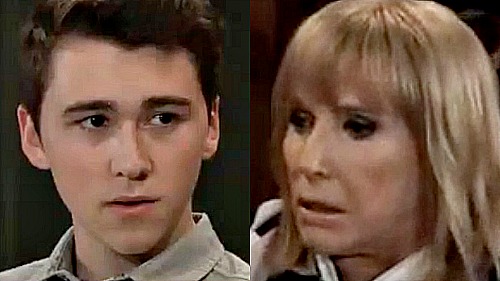 General Hospital (GH) spoilers tease that Monica (Leslie Charleson) and Oscar (Garren Stitt) will spend some quality time together. Monica was shocked to hear from Kim (Tamara Braun) and Drew (Billy Miller) that Oscar was refusing to participate in the clinical trial and seeking to emancipate from his parents. And she’s decided take matters into her own hands and sit Oscar down for a talk.

But Monica’s a smart lady, and she knows that taking the same approach as Oscar’s parents (that is, to treat Oscar like a child and insist that he participate in the clinical trial) will simply not work. Oscar’s stubborn, and he’s talked himself into living out his last days as he sees fit, rather than be a guinea pig for an experimental treatment that itself could kill him.

Monica’s a cancer survivor herself, and she’s been through many of the same emotions that Oscar’s trying to process right now. She also has more credibility with Oscar than his parents, because she’s dealt with cancer personally. Oscar will likely listen to Monica out of respect for her history of cancer, and because she’s his grandmother.

Monica probably realizes that if Oscar is ever going to participate in the clinical trial, then he has to get to that decision on his own, rather than feeling forced into it by others. Perhaps she’ll fill Oscar in on what it’s like to be a patient undergoing treatment…that it sucks at the time but that you can absolutely get through it if it’s meant to be.

She may also let Oscar know that all cancer treatments come with risk. If he was facing a routine course of chemo, that would come with risks and awful side effects, too, but he’d probably do it because it’s not as scary sounding as a clinical trial.

Do you think Monica’s guidance will ultimately lead Oscar to go for the clinical trial? Stay tuned to the ABC soap and don’t forget to check CDL often for the latest General Hospital spoilers, updates, and news.