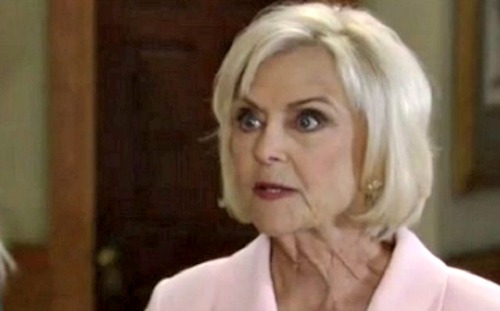 General Hospital (GH) spoilers reveal that Patty McCormack is enjoying her stint as a temporary Monica recast. In fact, McCormack would love to keep doing soaps full-time. In an interview with ABC Soaps In Depth, McCormack talked about the excitement of diving right in.

GH fans know Leslie Charleson was forced to step away from the role after an accident involving her dog. Charleson tripped over the pup and the fall caused some injuries. She wasn’t able to film anything, so General Hospital needed an emergency recast.

Fortunately, McCormack was available to fill in. She started to work the day after Charleson’s mishap, so it was undoubtedly a bit daunting. “It was like jumping into ice water at first,” McCormack admitted. “But my background in theater and live TV kicked in. Everyone’s so supportive and kept saying, ‘You’re very brave.’ So I felt good about it.”

Soap stars have to deal with plenty of dialogue. They often have to nail it in one take, but the challenge can be a real thrill for some cast members. “It’s sort of a high to do something by the seat of your pants like this,” McCormack said. “It reminds me of how fun it is to belong to a group. It’s not like doing episodic TV where you get together for a day or two and then it’s over. I like that a lot.”

Although Charleson is a Port Charles staple, McCormack was an excellent choice to replace her. Monica’s a combo of sweet and spice. It could’ve been tough to pull that off, but McCormack seems to achieve the balance effortlessly.

There’s no word yet on when Charleson will head back to General Hospital, but McCormack’s content to stick around as long as she’s needed. Of course, she doesn’t want to step on anyone’s toes. McCormack respects Charleson’s lengthy run and wouldn’t want to take anything away from that.

“I hope Leslie has a speedy return because everyone loves her,” McCormack said. “Forty years playing Monica — that’s a lifetime!” Still, McCormack might stay on longer if Charleson’s comeback is delayed. There’s even a chance she’ll make her way over to another daytime drama. McCormack’s loving the soap life, so let’s hope her talent continues to be appreciated.

Thank you my brother and friend. The feeling is mutual as you know. https://t.co/qoasbmonUN