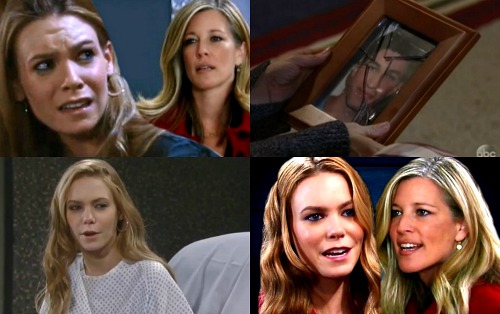 General Hospital (GH) spoilers reveal that Nelle’s (Chloe Lanier) playing with fire and she’s bound to get burned. When is Nelle going to learn that her twisted schemes never truly work? She’s a creative gal, but she needs to take her luck into consideration. Disaster is Nelle’s middle name, so any plan she comes up with is destined to explode.

Nevertheless, Nelle just doesn’t get it and that means she’ll move forward with her plan. After the little horror show she just put on, Nelle will be quite satisfied. She’ll assume that Carly’s already teetering on the edge of insanity. Nelle will hope this leads to heartbreak for Michael (Chad Duell) so she can be the one to console him.

Thanks to Josslyn’s (Eden McCoy) influence and a few other factors, Nelle might actually get what she wants initially. Michael may lean on Nelle somewhat as she supports him through his mom’s mental woes. Sonny (Maurice Benard) and Jason (Steve Burton) will definitely be worried about Carly in the coming weeks. It won’t be long before they share their concerns with Michael and leave him in fear.

Nelle will want Michael to believe she’s putting her issues with Carly aside to offer comfort. She’ll try to say all the right things so they can pick up where they left off romantically. However, General Hospital spoilers say any happiness Nelle finds won’t last. She can’t escape what she’s done – and what she’s done is pretty horrible!

Nelle has been “haunting” Carly with creepy Morgan (Bryan Craig) setups, so that’s definitely a low blow. You can bet that GH will make Nelle pay for that in the near future. One way or another, General Hospital spoilers say Carly will learn the truth. Jason or Sonny might uncover the scoop or it could even be Michael. Whatever the case, the whole story will come out and conflict is sure to erupt.

Of course, this isn’t the best time for a big blowup. Nelle’s pregnant, so there’s always the potential for a severe baby crisis. It’s easy to imagine Carly and Michael ganging up on Nelle for a heated confrontation. They could send Nelle into early labor if her due date hasn’t arrived yet. Even if this happens right around the time Nelle’s set to give birth, all this stress can’t be good for the baby.

There’s even a chance Carly will lash out at Nelle and cause some sort of accident. Nelle will certainly face some sort of payback, even if it’s inadvertent. General Hospital won’t let her off the hook for her terrible actions.

Will Nelle’s life be at stake? What about the kid? Will Michael and Carly put them both at risk? We’ll give you updates as other GH news comes in. Stick with the ABC soap and don’t forget to check CDL often for the latest General Hospital spoilers, updates and news.