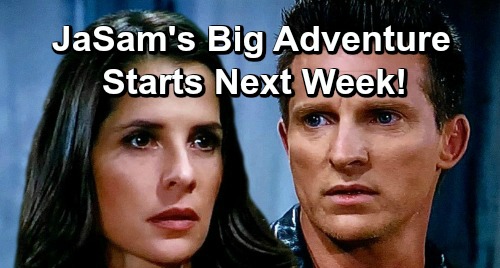 General Hospital (GH) spoilers tease that some mysterious emails will kick off a new adventure. Sam (Kelly Monaco) was confused enough by the obituary she received, but she’s about to have even more questions. Some unsettling messages will appear in Sam’s inbox on next week’s new GH episodes, December 17-21, so she’ll be worried about what else is in store.

It’s clear that Sam’s being targeted, but she doesn’t know who’s behind this threat. Sam also isn’t sure about this person’s motivation. She only knows it’s tied to her past since there’s a Leland Powell connection.

General Hospital spoilers say these creepy emails will offer additional clues. Curtis (Donnell Turner) will help Sam mull them over, but she needs someone who can truly ease her mind. That’s why Sam will ultimately lean on Jason. He’ll be Sam’s rock when she needs him – just like he always is!

Jason will get updates on Sam’s dilemma and do his part to solve the puzzle. He helped Sonny (Maurice Benard) with the missing Croton body mystery as well as the fallout. Now Jason needs to shift his attention to Sam and her conundrum. She’ll become his priority as this story deepens into one that’s focused on “JaSam.” GH fans can expect this to bring some interesting situations for the almost couple.

Perhaps Spinelli (Bradford Anderson) can pitch in, too. He’s usually on board for some hacking – and matchmaking, of course. It’s easy to imagine Spinelli giving Jason and Sam another nudge as they go on this journey. They’re so close to a real reunion, but they need one final shove to take the leap.

There’s a good chance this hot plot will provide that shove. Jason’s willing and ready, so Sam’s the problem here. As they sort out the twists and turns of this case, maybe Sam will finally let her guard down. If Jason comes through for her during another life-threatening ordeal, that’d be another way to bring them closer.

Regardless, it sounds like Jason and Sam are on the right track. General Hospital spoilers say some little emails will lead to big drama, so that means lots of “JaSam” airtime and opportunities. We’ll keep you posted as other GH news comes in. Stay tuned to the ABC soap and don’t forget to check CDL often for the latest General Hospital spoilers, updates and news.