General Hospital Spoilers: Nelle Brings Morgan Back from the Dead for May Sweeps – Bryan Craig Returns? 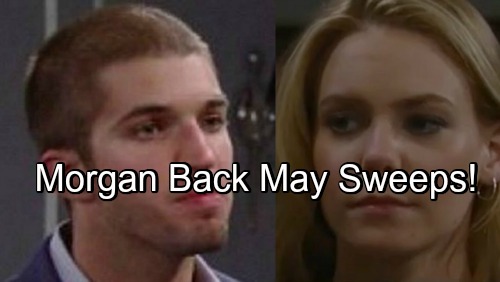 General Hospital (GH) spoilers tease that Kevin’s (Jon Lindstrom) efforts to help Carly (Laura Wright) could give Nelle (Chloe Lanier) the upper hand. Carly recently made an appointment with Kevin at Sonny’s (Maurice Benard) urging. She nearly walked out before the session started, but Kevin convinced Carly to stay and open up.

It was good for Carly to get a few things off her chest in a judgment-free zone. Kevin’s just there to listen and offer tools to deal with the drama. One of those tools happens to be anti-anxiety medication. Kevin’s decision to prescribe these pills could be a crucial clue about what’s next.

When Carly asked about the side effects, Kevin mentioned some minor symptoms that had been reported. He admitted that hallucinations sometimes occur, which understandably concerned Carly. She wants to prevent incidents like the ones she’s been facing, not bring on more!

Kevin downplayed the risks since Carly will be taking a low dose, but we all know this issue is going to come up again. It seems Kevin just made Nelle’s scheme a whole lot easier. Now she can take her plot to the next level and nobody will suspect a thing.

Nelle has already pulled off some despicable strategies, but her next tactic will be the dirtiest by far. GH has a May sweeps shocker brewing and it could involve Morgan’s (Bryan Craig) return from the dead. Nelle may hire a lookalike or at least someone who will resemble Morgan in the shadows. Either option would rock Carly to the core!

Nelle and the anti-anxiety meds could even make a powerful team. Once Nelle kicks off this phase of her plan, Carly’s delusional mind may take care of the rest. In other words, Morgan’s lookalike could seem like the real deal in Carly’s head. This would allow for a potential Bryan Craig popup return since General Hospital’s been showing off his picture lately.