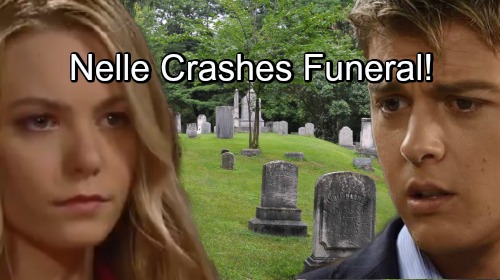 General Hospital (GH) spoilers tease that Michael (Chad Duell) will continue to struggle with grief and regrets. Only Nelle (Chloe Lanier) and Brad (Parry Shen) know about the baby swap, so Michael assumes his son is gone for good. Dealing with the loss has been tough, but things are about to get even tougher pretty soon.

Now that Carly’s (Laura Wright) out of Ferncliff, she intends to focus on her family. Supporting Michael will be a big part of that. General Hospital spoilers state that Carly will take the lead on some unpleasant tasks. She’ll point out that they need to plan a funeral for Jonah and say their goodbyes on Tuesday’ s new GH episode, August 14.

It’s going to be hard for Michael to let go, but Carly will promise to be right there by his side. She’ll be glad that she’s back with her loved ones and can help them when they need her. GH fans can expect some tearful moments for Michael later this week. He’ll have a bit of a breakdown as he processes everything that’s happened.

Kim (Tamara Braun) assured Michael that the crash wasn’t the cause of death, but he’s probably still facing some guilt. Michael just wanted to give this kid a beautiful life, but it was over before it ever began – at least that’s what he believes.

General Hospital spoilers suggest that a heartbreaking funeral service is on the way. Michael and his family members will reflect on the tragedy as they bid farewell.

Of course, we should point out that Nelle hasn’t actually been convicted yet. She still has to be put on trial before she goes down for her crimes. We also know Chloe Lanier took a summer break and returned to film her final scene. It’s possible Nelle’s faceoff with Carly was really the end of the road, but what if she’s got one more trick up her sleeve?

General Hospital buzz is that the judge wouldn’t be able to block Nelle from attending Jonah’s funeral. If Nelle gets updates and wants to go, there may not be anything standing in her way.

Naturally, that would cause plenty of chaos. Michael promised to push for mercy in their son’s memory, but he may change his mind if Nelle stirs the pot. Carly (Laura Wright) and Josslyn (Eden McCoy) wouldn’t be too happy either!

Nelle’s always full of surprises, so you never know where she might pop next. Do you think she’ll crash the funeral and spark some meltdowns? We’ll keep you posted as other GH news comes in. Stay tuned to the ABC soap and don’t forget to check CDL often for the latest General Hospital spoilers, updates and news.