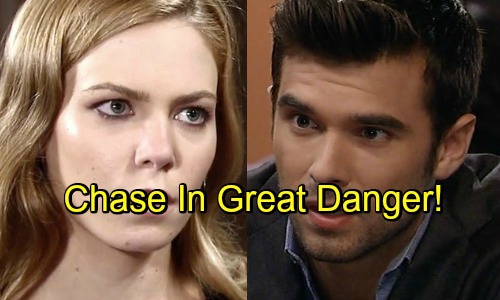 General Hospital spoilers tease that Chase (Josh Swickard) and Michael (Chad Duell) are on dangerous ground with their plot against Nelle (Chloe Lanier). The two are baiting Nelle methodically, with the goal being for Nelle to get Chase to kill Michael. It’s quite the plan, and so far it seems to be working.

Nelle has apparently responded well to Chase and his professed “love” for her. And Chase has done a good job planting seeds of doubt in Nelle’s head about Michael. Michael has played his part well, too, making Nelle doubt his commitment to her. Of course, the point of all this is for Nelle to come to believe that Michael is stringing her along and will likely dump her after he gets what he wants… their baby.

But Chase and Michael may be underestimating Nelle. Yes, they’ve been careful not to overplay their hand as they’ve schemed against her, but that doesn’t mean that Nelle’s clueless about what they’re doing. Even if she hasn’t exactly figured out how they are working together and what their end goal is, she may come to suspect that something’s up.

And when Nelle does suspect them, watch out. There’s always the danger that she will take matters into her own hands and try to kill Michael herself. Chase, Michael, and Jordan (Vinessa Antione) are taking every precaution to keep Michael safe. But what about Chase? Sure, Chase is a cop so naturally he’d be expected to shoulder more risk, but has anyone really thought about how Nelle could go after Chase?

Nelle may see both Michael and Chase as expendable. Once Chase does the deed and “kills” Michael, Chase could be in grave danger. It would make perfect sense from Nelle’s perspective to want to get rid of Chase after he kills Michael to tie up loose ends. Chase will need to watch his back just as much as Michael will!

Do you think that Nelle has it in mind to get rid of both of the men in her life? Stay tuned to the ABC soap and don’t forget to check CDL often for the latest General Hospital spoilers, updates, and news.