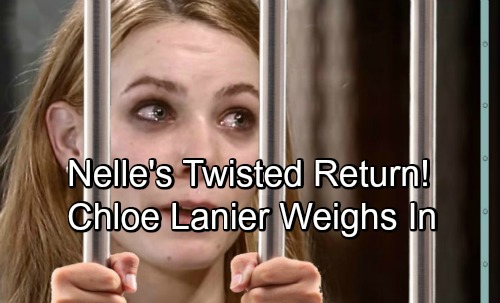 General Hospital (GH) spoilers tease that Nelle’s (Chloe Lanier) comeback could already be in the works. After all, the nature of Nelle’s departure makes her return pretty much inevitable. It’s just a matter of when GH will put it in motion. It looks like General Hospital is planting the necessary clues and setting up that eventual bombshell. Michael (Chad Duell) had better brace for big trouble!

Chloe Lanier recently dropped a potential hint about reprising her role. The GH Twitter account sent out a tweet regarding Nelle and her devious plan. It said, “Nelle may be gone… but she’s not letting Michael go that easily. Can Carly talk some sense into him?” Lanier retweeted the tweet and added a comment of her own. She simply put “What” along with a monkey emoji.

Lanier obviously couldn’t go into detail about what the show has in store. This baby swap storyline is a big deal, so GH wants to keep the rest of the drama under wraps. They can’t anyone leak how or when the truth will finally come out.

Nevertheless, General Hospital’s finding ways to keep Nelle’s name in this hot plot. She reached out to Kim (Tamara Braun) and asked the doc to blame hormones for her actions. Now she’s writing to Michael and stirring the pot all over again. Even though she’s not currently on canvas, it’s clear that Nelle will remain a key player in this story.

Of course, Lanier is paying attention to General Hospital’s social media accounts. She’s engaging with fans and following along. That could be a sign that Nelle will return sooner rather than later. It’d be great to see Nelle get back in the game and cause more chaos. Lucas (Ryan Carnes) and Brad’s (Parry Shen) world is set to crumble eventually, so Nelle could be the reason the whole scheme unravels.

Will Nelle get desperate and use what she knows as leverage for her freedom? Will she keep lying and taunting as long as possible instead? Either way, Michael will have to face his devious ex at some point. That should be a faceoff that’s worth tuning in for!