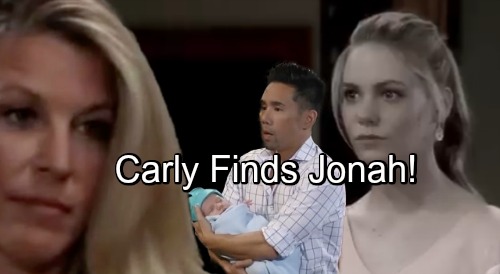 General Hospital (GH) spoilers tease that Carly (Laura Wright) will stick to Michael (Chad Duell) like glue. He’ll continue to struggle this fall – perhaps even more than before. Michael can’t help but feel lost and alone. Even thought he hated Nelle’s (Chloe Lanier) guts, he had a purpose when she was around. Michael was so focused on getting Nelle out of the picture and preparing for his child.

GH fans know Michael managed to get Nelle locked up with Chase’s (Josh Swickard) help. Unfortunately, the payoff wasn’t as satisfying as he’d hoped. Without the son he’s come to love and look forward to, Michael’s life feels empty. He’ll have a hard time finding ways to fill the hole in his heart.

Naturally, Carly will think she’s got just the cure. She feels like a mother’s love is the answer to just about anything. Carly’s support certainly can’t hurt, but it won’t magically erase Michael’s pain. Nevertheless, he probably won’t have the strength to push his mom away. General Hospital spoilers state that Michael will be haunted by his loss and the thought of what might’ve been.

Of course, watching Brad (Parry Shen) and Lucas (Ryan Carnes) raise “Wiley” will make matters worse. Michael’s a good guy, so he’s trying to be supportive. Deep down, he has to be feeling hurt and envious. Michael wishes he could be a doting dad right now. He wishes he had the chance to hold his son his arms and give him all the love in the world.

Little does Michael know he recently held Jonah! He just assumed he was cradling Lucas and Brad’s new bundle of joy. As Michael’s suffering intensifies, Brad will continue to battle regrets. This secret is poised to blow at some point, so how will the truth come out? There are plenty of strategies GH could try. Threats are coming in from several angles, but it’d be an interesting choice to use Carly here.

Since Lucas is her brother and Michael’s her son, Carly’s bound to get caught in the fallout. If she gets a clue and develops suspicions about “Wiley,” that’d be even better. General Hospital spoilers say Carly will be in a place of desperation on September 19. It’s clear that she’s going to devote some serious time to helping Michael heal.

Carly will remain focused on Michael for as long as it takes. That could be a bad sign for Brad. He doesn’t need Carly dwelling on this baby crisis, but that’s exactly what’ll happen. Will Carly ultimately uncover the real story and expose the shocker? This could lead to major family drama.

Nelle should be pleased once the chaos erupts. Chloe Lanier pretty much guaranteed she’d be back someday, so Carly and Nelle’s feud should reignite – even if it’s in the prison visiting area. We’ll give you updates as other GH news comes in. Stay tuned to the ABC soap and don’t forget to check CDL often for the latest General Hospital spoilers, updates and news.