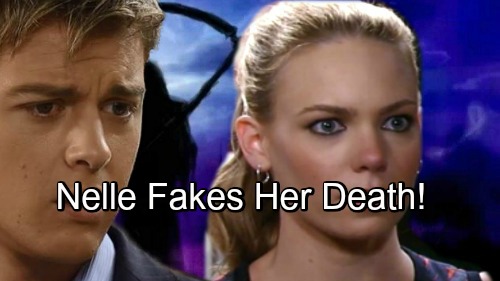 General Hospital (GH) spoilers tease that Nelle Benson Corinthos (Chloe Lanier) may try to beat Michael Corinthos (Chad Duell) at his own game. Detective Harrison Chase (Josh Swickard) came up with a plan to bring Nelle down, but it’s awfully risky. Michael intends to fake his own death, but he could face a lethal twist he never saw coming.

The details of the plan haven’t been revealed, but Michael and Chase would undoubtedly like to prove a murderous pattern. Since Nelle will push Chase to kill Michael, the PCPD may be able to slap her with some well-deserved charges. Now that Nelle’s becoming a black widow, Zachary Grant’s case surely deserves a closer look, too.

Nelle did some eavesdropping recently, which brought some shocking discoveries. She heard Michael say he planned to divorce her as soon as the baby’s born. Since Nelle’s nine months along, this is going to be an awfully short marriage.

Nelle isn’t in the loop on the faked death plot, but she definitely suspects this is some kind of trap. As a result, Nelle will be fine with taking Michael out of the picture. She’ll hope she can use Chase to make it happen, but she doesn’t realize they’re in cahoots – not yet anyway!

General Hospital spoilers say Chase and Michael’s scheme won’t go as expected. During the week of July 30-August 3, Michael won’t be able to stay in control. Meanwhile, pressure will push Nelle to the edge. As Nelle gets backed into a corner, desperation could lead to a huge strategy shift.

Perhaps Nelle will decide there’s no way she’s getting her hands on Michael’s money. She may abandon that idea and just try to get the heck out of dodge! Of course, Nelle would want to get a little revenge before her GH exit. She’d also want to make sure no one would come looking for her.

Will Nelle turn the tables by faking her own death and framing Michael? If Nelle sets up a situation where she’s presumed dead, Michael may land in prison for murder. Nelle could leave behind some evidence that points in his direction. Next, she could hustle out of Port Charles undetected and be satisfied knowing Michael paid for his betrayal.

As a bonus, this would add to Carly Corinthos’ (Laura Wright) misery. She’d hate to see Michael locked up for a crime he didn’t commit. It sounds like an excellent tactic, but could Nelle pull it off? We’ll give you updates as other General Hospital news comes in. Stick with ABC’s GH and don’t forget to check CDL often for the latest General Hospital spoilers, updates and news.